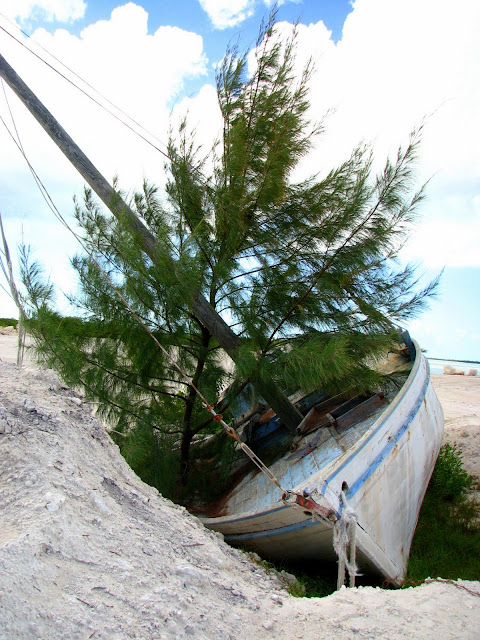 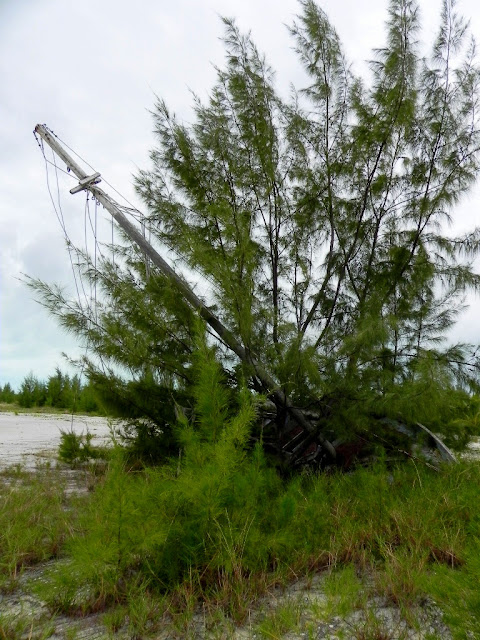 On Saturday, March 19th, DECR Project Manager Bryan Naqqi Manco offered an invasive species workshop at the National Environmental Centre.  At the very top of the Turks and Caicos list is the Casuarina, also known as the Australian Pine.  This tree is believed to be allelopathic, meaning it poisons the surrounding soil with chemical compounds and spreads a thick blanket of needles which make it virtually impossible for any other species to grow under it.  Here in the Turks and Caicos Islands, one often finds the species colonising the sandbars and likely where one has taken root, multiples follow shortly after. For an astounding example, populations in South Florida quadrupled from 1993 to 2005, a fact not difficult to believe as demonstrated by the photos above.  If you have a Causarina on your property, the best step is to chop the tree down and poison the stump with roundup.  Naqqi explained the tree is closely related to oak and that there are many great uses for your now fallen tree.  Causarina is a straight hardwood and is excellent for making poles, charcoal, kindling, and even insulation (if treated as may attract fungus).  The needles make an excellent termite resistant mulch.  If you can’t part with your Causarina then prevent it from spreading by raking the needles weekly and trimming the fruit, the small pinecone looking flower.  If you have several Causarina on your property and don’t mind the trees still standing once dead, you could drill into the trunks at a 45 degree angle and pour roundup in the hole, or try ring barking the trees by ripping the bark in a circle around the bases. 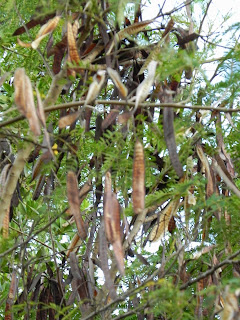 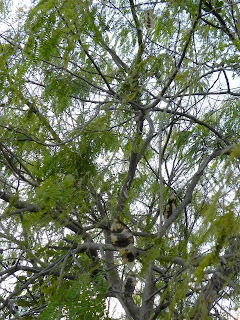 Number two on the invasive list is locally known as Cow Bush, Leucaena leucocephala.  Cow bush can be mistaken for a local locust tree, Lysiloma latisiliquum as the leaf structure is very similiar.  To differentiate the two look for the seed pods.  If the pods split easily and are extreme in quantity it’s cow bush.  If the seed pods are very thin and papery it is the locust tree.  The seed pod of the cow bush consists of 20% protein, useful in some parts of the world as a fodder crop, hence our common name. Consumption is advisory as the foliage, the seed pods, and the seeds themselves contain toxic mimosine which causes hair loss, reduced thyroid function, and other health issues.   The toxins can be depleted if one boils twice before consuming, but as Naqqi explained it’s a lengthy process for very little taste return.  Some ruminants like cattle, sheep, and goats have the digestive system for it, they can consume it safely if they are accustomed to the food source and have the necessary rumen bacteria to break it down.  Cow bush has ivory puffball shaped flowers and produces an incredible amount of seeds per tree. It is so prolific experts are unsure where the tree originated.  They can grow over 20 feet in just two to three years, and if one has ever seen a gardener try to yank one out of the ground at a mere 8 inches of height, one would realize the strength of their root system and exactly how tough this tree is to remove.  Burning them only fosters growth; it causes the seeds to burst out of the pods like pocorn and allows more oxygen to reach the seed.  Cow bush creates a nectar around the leaves which fire ants like so be careful when trying to remove.  Young trees can be clipped persistently until they die, which may take many months of monitoring.  Established trees must be cut at the lateral roots, just below the hip, or where the trunk meets the roots.  This will involve quite some digging.  From first hand experience, trying to take a shortcut by chopping the tree low with a chainsaw will not save you any time.  The stump will quickly be covered in new green shoots.  These trees multiply at an alarming rate so dealing with them on your property is a ” sooner the better” recommendation.  We removed one large 25 foot tall tree at the front of our drive last year and I still remove dozens of babies bi-monthly around the area it once stood. 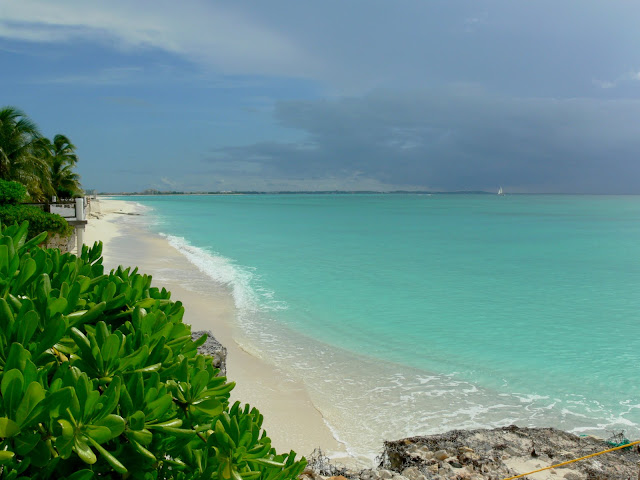 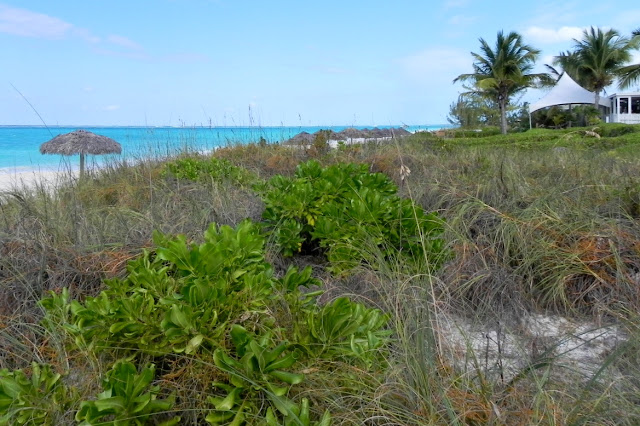 Scaevola creeping into the dune line near the Somerset
Number three on our list is Scaevola Taccada, or Beach Naupaka.  Not to be confused with our native Scaevola Plumieri which has dark berries, the invasive scaevola has large white berries and a distinctive white half flower which Hawaii explains through legend.  Scaevola originated in the Indo-Pacific but as the seeds float, they have been a fast travelers.  It is highly suggested to remove scaevola specifically around beach and dune areas where they strangle out other vegetation.  Chopping down should be far easier than the causarina or cow bush, but make certain to remove the roots with a pick axe.  If you are using scaevola as a hedge, make certain to keep it pruned so as not to let it spread. 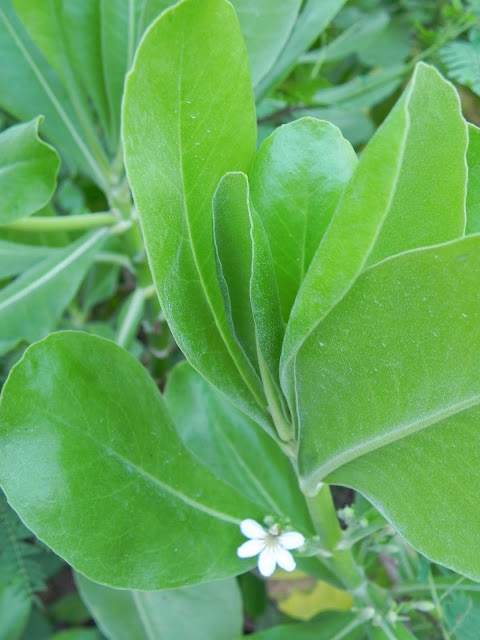 The half flower of the invasive Scaevola
Number four on the list is most likely the least known species, commonly called the Brazilian Pepper, Schinus terebinthifolius.  This sprawling shrub often inhabits disturbed areas, wet or dry, and quickly displaces other plants and trees.  The berries are very well liked by birds which encourages their spread.  The Brazilian Pepper resembles the native Hercules Club which has lime berries and is quite rare, so be sure to identify properly.  The Brazilian Pepper has a skin  irritant sap so be careful to wear gloves during removal.  Removal is best to cut to the ground with a machete or chainsaw, then cut a divet into the trunk and pour roundup.  Do not burn as it may cause a serious reaction for anyone sensitive to this plant. 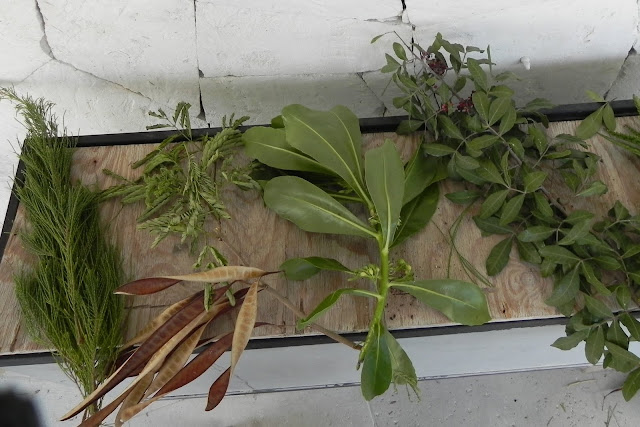 Invasive species samples from left to right #1 Causarina, #2 Cow Bush, #3 Scaevola, and #4 Brazilian Pepper
Other species that are on the world’s top 100 invasive species list but that have been naturalised here in the Turks and Caicos Islands are the African milk weed herb (great host plant for the monarch butterfly), Sisal, Red Milkweed, Moses in a Boat (most likely introduced by the Tainos for medicinal and spiritual purposes), and Kalanchoe (also known as Mother of Thousands, from Madagscar and toxic).  If you find these species on your property but find they aren’t a direct threat to your other vegetation, feel free to let them be.
For more information on Invasive Plants in the Turks and Caicos, please click here.