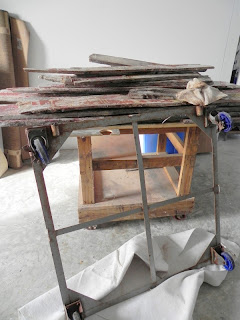 Before
If there is one positive aspect of hurricane season, it is the process of purging that usually comes along with the many preparations.  Often a sideways glance at an object that has done nothing but gather dust for the last few months means it is headed to the dump or either the TCI Red Cross or The-Salvation-Army-Turks-and-Caicos-Islands.   The metal trolley and the salvaged sloop pieces made the “stay” cut so we took the weekend to finally breathe new life into these rusty and dusty discards. 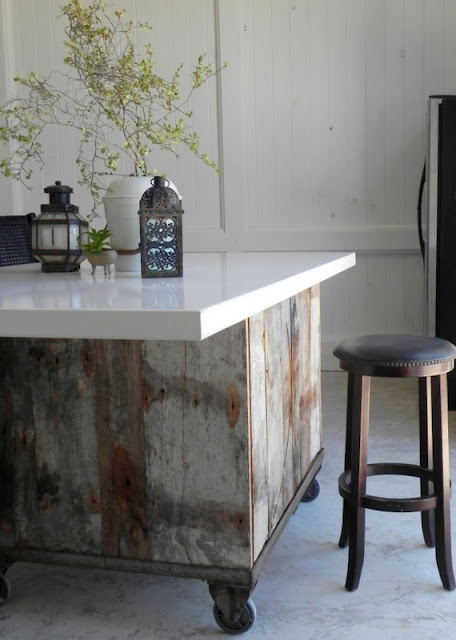 After
The metal rolling frame had to be cut down as it was about eleven inches too large too accept the pair of black bamboo and cane barstools I acquired at It’s Stuff Consignment Shop.  After the frame was shrunk and the casters sprayed, we built a box that would allow for storage within the island.  Then the pieces of the old sloop were milled so they could be placed side by side and then cut to the proper height.  Two side panels were cladded and four doors were hinges to the cabinetry box.  The white countertop was a temporary solution for a client’s office who had no use for it once the permanent table top was completed.  The high gloss finish makes for a super easy to clean kitchen surface. 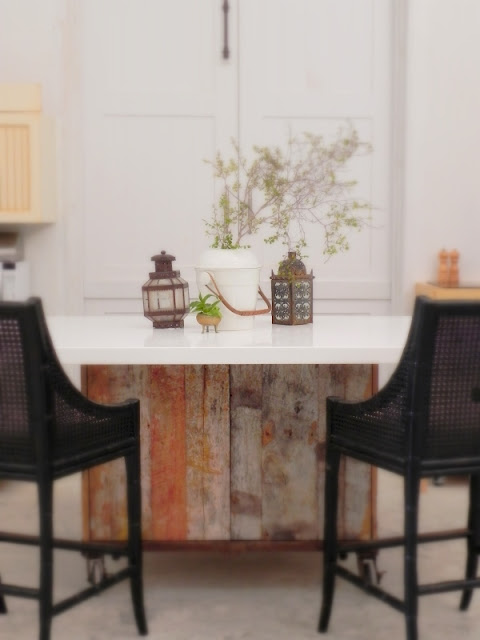 I love our new island, it’s a perfect fit for our rustic beach barn. 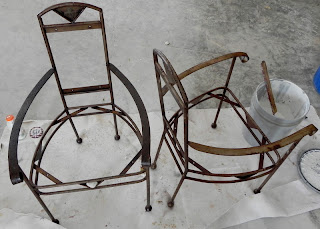 Before
The second project, this pair of metal arm chairs pictured above, is on it’s third reincarnation.  Years ago I made plywood seat and back rests and covered them with cream sunbrella fabric.  Then for our wedding I recovered them in vintage fabric and utilised﻿ them for our bride and groom sweetheart table.  Now they will go back to Fleur de Lys Villa, where the extra padding and facelift will provide comfortable seats for villa guests to enjoy the courtyard. 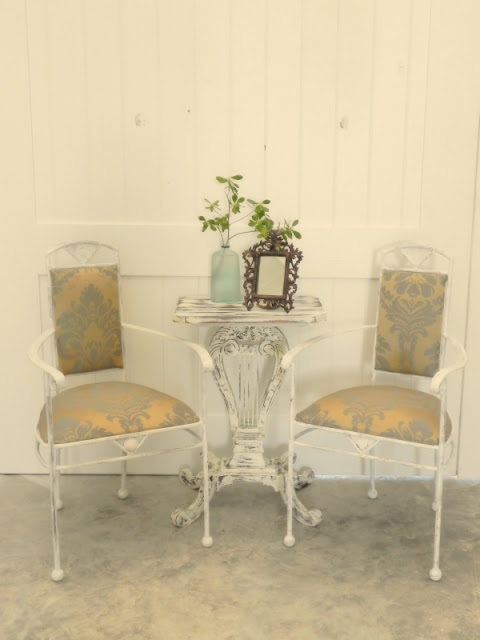 After
The harp table was a May project blog post. 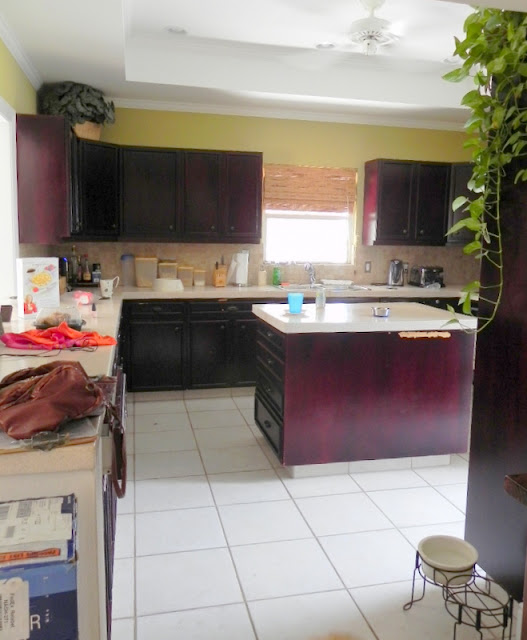 Kitchen Before
Last month this wednesday-woodworks post discussed this clients options with their kitchen refinish.  This client decided to go with TC Millworks suggestion and build new shaker style doors and drawer fronts.  The cherry finish looked outdated and unharmonious with the newer nuetral countertops and tilework and had begun to flake and peel  in several areas. 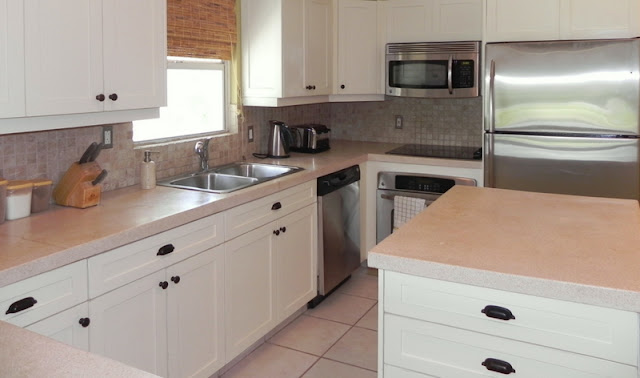 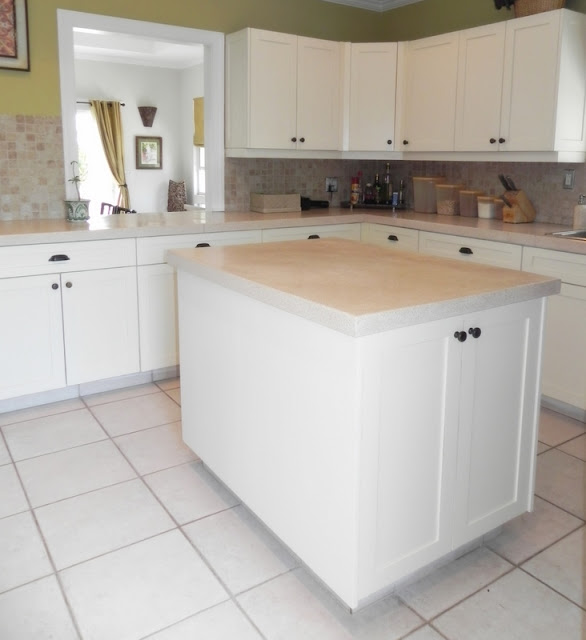 This client also had a few minor issues that needed attention.  A foster puppy had chewed the edges and legs of the family coffee table so a little sanding and spraying brought it back to brand new.  There was also need for closet remodels, a vanity, and full length mirrors for two teenage daughters.  After touring the house and getting a few ideas, we decided to take a neglected dark finish desk sitting idly in a corner and transform it into the needed vanity. 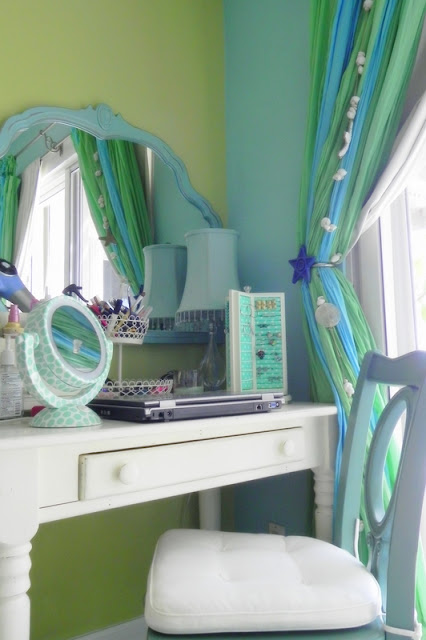 After refinishing in white and creating a mild distress, adding a robin’s egg blue chair and antique style mirror (sourced from pbteen) the vanity was cute as a button complete. 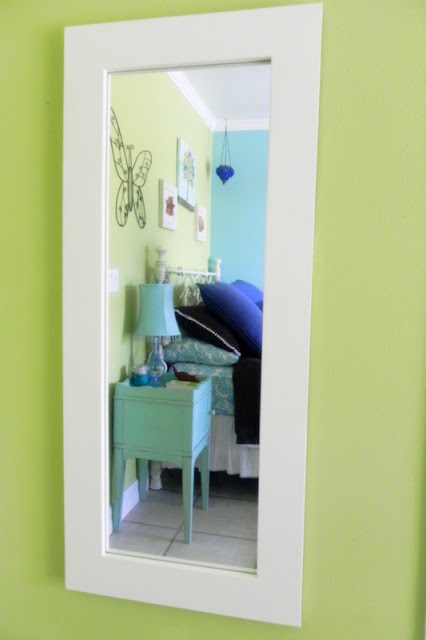 The client also took TC Millworks suggestion to reorient the bedroom set to take better advantage of a great view of the pool area and create more practical traffic flow.  Full lenth mirrors added depth to the room and provided the best tool for the girls to take full advantage of their new closets. 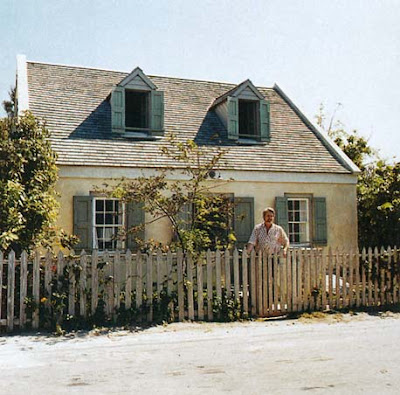 Image via rusticroosterinteriors﻿
Hurricane Irene is upon us in Turks and Caicos at this very moment (so I just may post this a little early in case we lose power).  Those living in her path who have spent the day boarding up their homes and/or businesses are most likely completely exhausted at this point in time, hoping and praying their plywood holds up to 100-150 mile per hour winds.  Those of us who have invested in shutters have spent minutes versus hours making certain our doors and windows are secure and will a sleep a little more at ease knowing at least that particular aspect is one less thing to worry about.  If you live in the Turks and Caicos and have had it with your first, or fiftieth, brutal boarding up, it’s time to call TC Millwork to custom build wood shutters that will make your residence or business more charming AND your life much easier come next hurricane season.  Those who are still preparing, please see this handy  checklist.  Those of you who have already had Irene pass, congrats, and those of us who are still in the middle of it, good night and good luck! 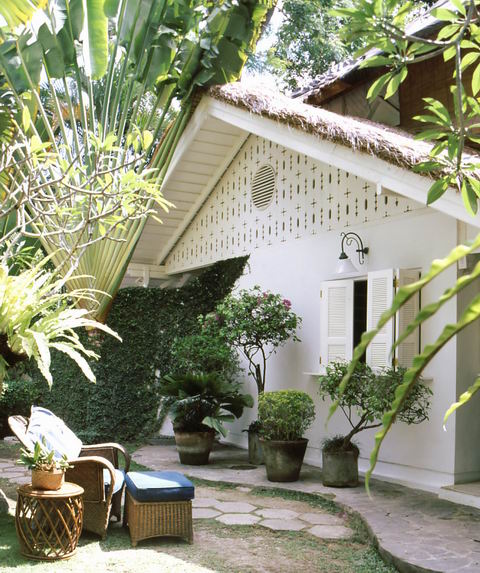 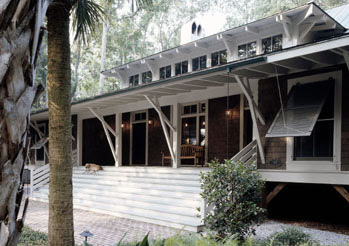 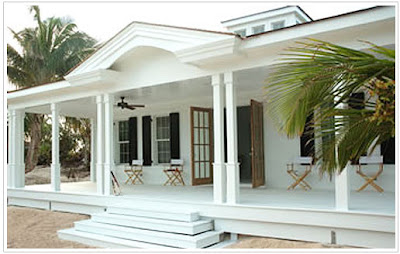 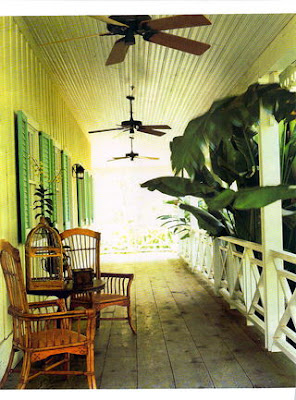 Image via Velvet and Linen 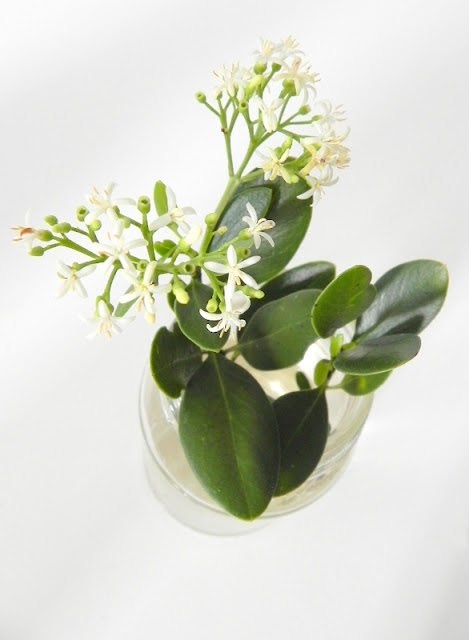 Erithalis Fruticosa, known as Black Torch in the Turks and Caicos, fruits and flowers all year long and is commonly found near beaches and growing in limestone soils. It is often referred to as a shrub; most often reaching 1-2 meters or less than 5 feet in height, although this slow grower can reach over 8 meters, or 30 feet, and therefore would classify as a small tree. The following detailed description from http://www.fs.fed.us/
“Usually the
species has multiple stems arising near the ground
line and many branches that are stiff and
sometimes gnarled. The bark is gray and
smoothish to warty. The resinous wood is brown,
hard, fine-textured, heavy, and has visible growth
rings. Black torch plants are supported by brown
roots that are often contorted as they grow over
rocks and into cracks. The foliage may be dense or
diffuse depending on whether the shrubs grow in
full sun or partial shade. The opposite leaves have
3 to 20 mm petioles, orbicular to oblanciolate
blades 2 to 12 cm long with entire edges, and darkgreen
upper surfaces. The inflorescences are lateral
or terminal panicles containing many small, white
flowers. The black fruits are globose or flattened
drupes 3 to 4 mm in diameter that have a bittersweet
flavor and contain five to 10 nutlets
(Howard 1989, Liogier 1997, Little and others
1974, Nelson 1996). It is morphologically a highly
variable species (Long and Lakela 1976).”

The name “black torch”comes from it’s former use as just that, a “candlewood.” The descriptive “black” relates that the resinous nature of the wood would have generally created a great deal of smoke when burned. Elsewhere thoughout the Caribbean, the common names imply the same; “bois chandelle” and “bois chandelle noir” in Martinique, Gaudalupe, and “flambeau” and “bois flambeau” in the Dutch Antilles and Dominica. In Puerta Rico it is called “tea,” perhaps due to the bark, berry, and resins use as a treatment for inflammation of the kidney and bladder. Another medical application was to dry and grind the leaves to create a salve for skin sores. I happen to love Tobago’s common name, “parrot apple” which implies a favorite food of the said bird. Here in the Turks and Caicos it is eaten by the Kirtland’s Warbler and the Rock Iguana and apparently is well liked by butterflies. I would be curious to ask a Cuban where “jayajajico” and “rompe machete” come from. The species is a hardwood, resistant to rot; the heavy, fine textured, wood and dark streaked heartwood, could create fine turned articles (to the highly skilled woodworker patient enough to work with small pieces). 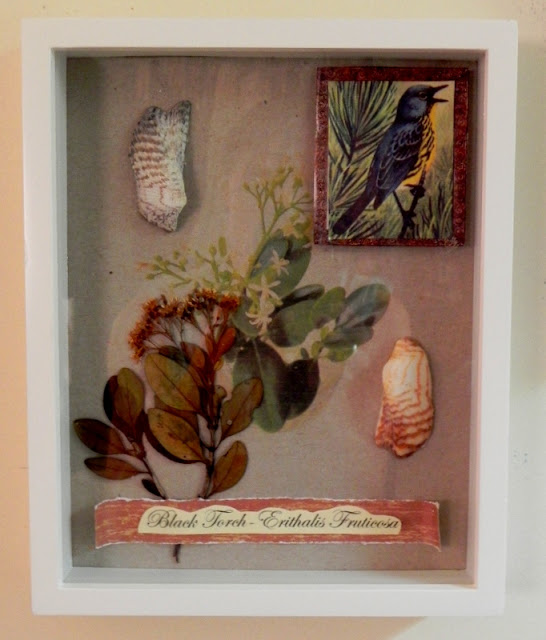 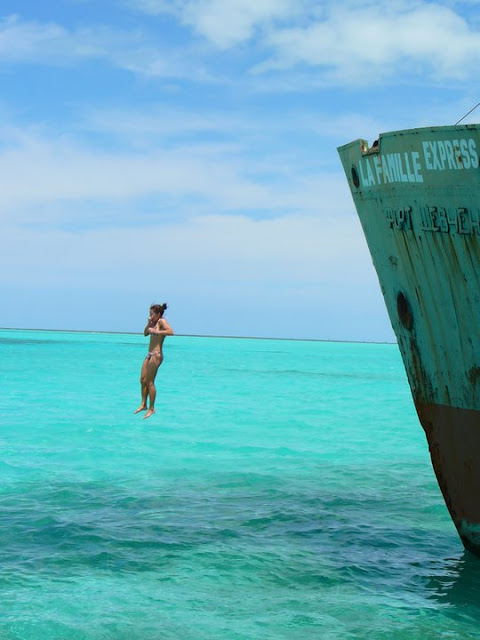 Last month friends of ours said “goodbye to the sandbar.”  These two adventurous Canadian kids lived Caribbean life to the fullest here in Turks and Caicos. 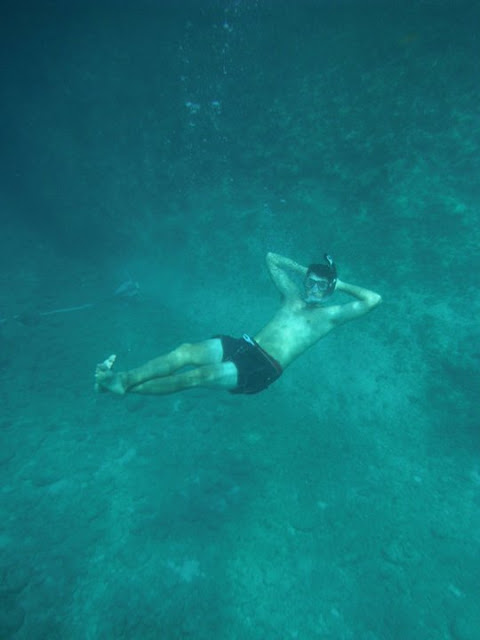 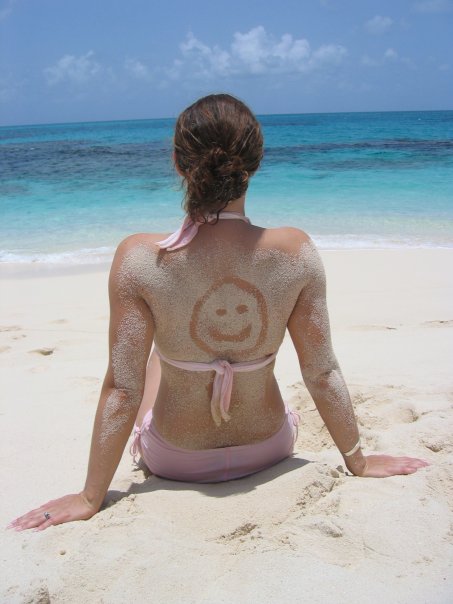 All images from facebook.  I think the above image should be made into a poster for Turks and Caicos tourism! 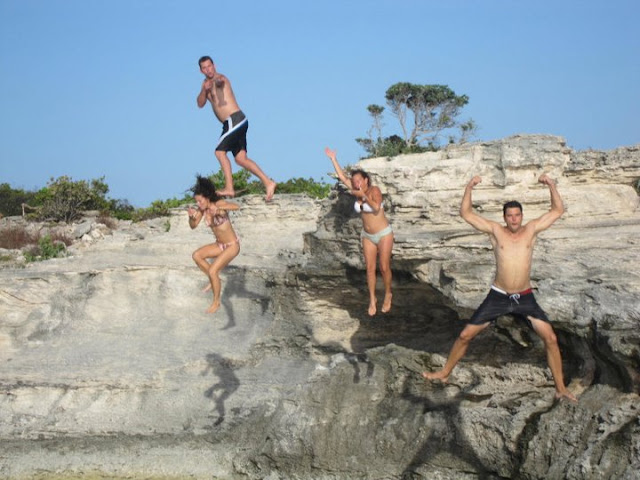 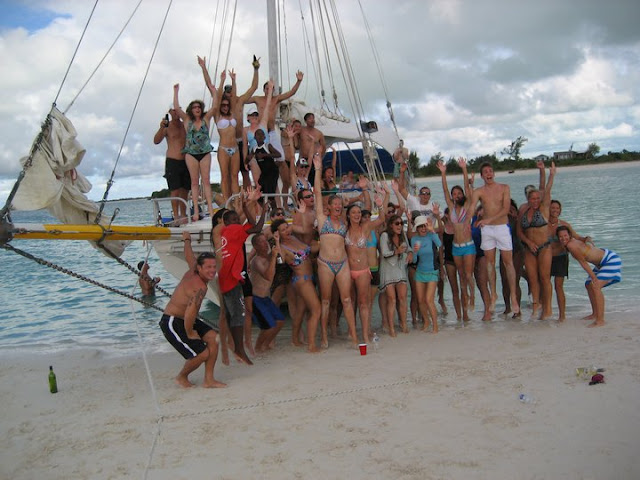