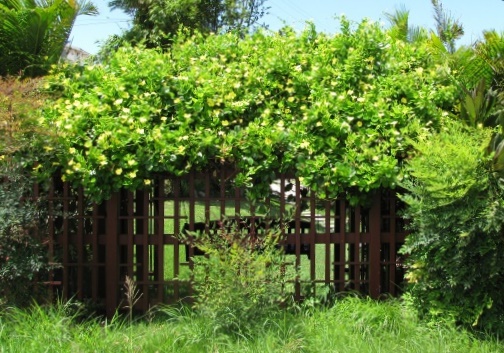 Image from hear.org
The Wild Allamanda, Pentalinon Luteum, is currently in full bloom in the Turks and Caicos Islands (they bloom all year but peak in spring or summer).  These vines may grow 8-15′ and are easily distinguished thanks to their glossy leaves and bright yellow trumpet shaped blossoms.  These pretty climbers are perfect for Turks and Caicos; they enjoy full sun, prefer sandy or limestone soils, and are fairly drought and salt tolerant.  Butterflies and hummingbirds are visitors and the Watch out for the sap as it is poisenous when ingested and may cause skin rashes or eye irritants.  To find out more about these beautiful vines, please see regionalconservation.org 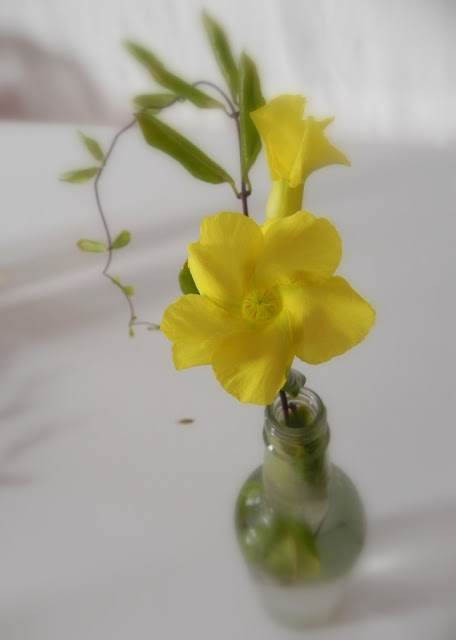 These vines host the larvae of the Syntomeida epilais, or polka-dot moth wasp pictured below. 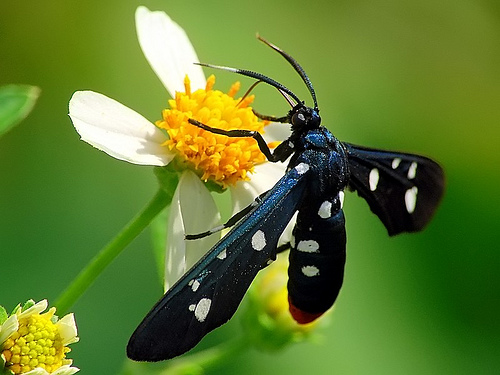 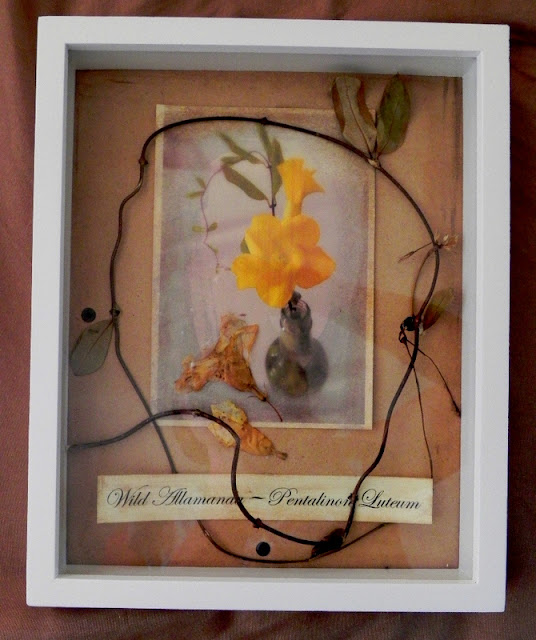 The Wild Allamanda shadowbox will be for sale at an upcoming market.﻿ 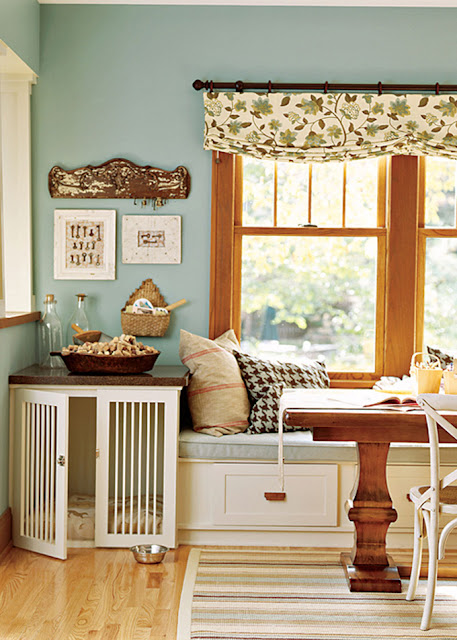 Image from ﻿country home
What a brilliant way to keep Fido cozy without sacrificing style!  Do you have a big unsightly pet cage taking up unnecessary space in your home?  This could be your problem solver! I must have puppies on my mind as our recent foster is now happily settled in with her new family in Pennsylvania.  Congratulations to Susan with their new addition Caico! 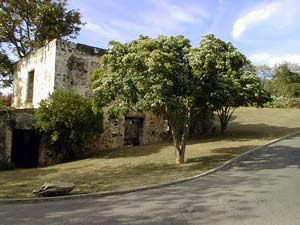 A St. John Lignum Vitae in lovely surrounds.  Image from st john beach guide, accompanied by a great article for further reading .
Lignum Vitae has many common names, each one a history lesson is their own right.  “Palo salto”, Spanish for “holy wood,” comes from the woods many medicinal uses and healing properties.  “Guayacan” or “guaiacum”, is a word with Maipurean origins, the ancient language of the native Tainos.  “Greenheart” is based literally on the color of the tree trunks Heartwood and also it’s practice of turning green when exposed to sunlight.  “Ironwood”, is a common name many different woods have been called with reference to their density and hardness. “Pockenholz” is used in some parts of Euorope. By far the most popular common name is Lignum Vitae, “tree of life,” which stems from it’s Latin roots which  literally translate to “wood of life”.  This tree certainly has a long history, deep rooted in the Caribbean but with far reaching purposes all over the world.  It has been classified as the hardest of all traded woods ( 4500 lbf on the Janka hardness test scale), and for this reason stayed in high demand up until the advent of high quality plastics and composite materials.  History indicates that lignum vitae was used commonly as mortar and pestles and in many labor industries; wood carvers, ship builders for belaying pins, deadeyes, and various types of bearings due to it’s high wax and resin content, clock builders for wheels (including the famous inventor John Harrison), mechanics for bushings and axles, even jewelers in the process of cutting jems.  Up until recently the British police used lignum vitae Batons, yielding the strength of steel without breaking skin.  Today it is used by forensic scientists and doctors to trace blood as the resin, combined with an alchohol solution, will turn blue when it comes in contact.  Impressed yet?  Now read this from wikipedia., “After the 1906 San Francisco earthquake, the urgent need to rebuild the streetcar system and the inability to obtain regular composition, porcelain, or glass insulators for the electrical feeders fast enough, a significant number of insulators were turned from this wood.[5](readily available from the ships in the harbor as ballast) as a “temporary” solution. Many of these lasted into the 1970s with a small number remaining in service as of 2009.”
100 years of longevity!  This wood sinks in water, resists termites, stands up to marine conditions, self lubricates, and is a non toxic pharmaceutical!  Talk about a miracle of nature!
﻿ 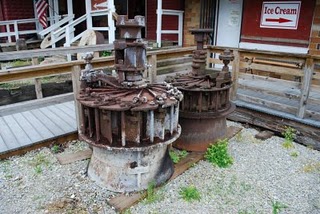 A mill turbine with lignum vitae bearings, image from danes notes on boats
By the turn of the century the wood was not only being used at work but also at play.  Cricket and croquet, sports imported to the Caribbean by the British in the early 1900’s, made use for the very durable, dense wood in mallets and heavy bails, and also for European Skittles balls and Lawn Bowls.   To read more about the interesting history of cricket in the Caribbean please click here.  The Hardy Brothers of Alnwick began using lignum vitae for their world famous Greenheart fly fishing rods.   Even antique sets, like those pictured below, are often in immaculate condition due to the great durability of the wood. 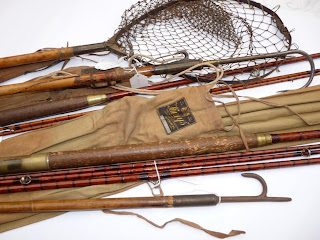 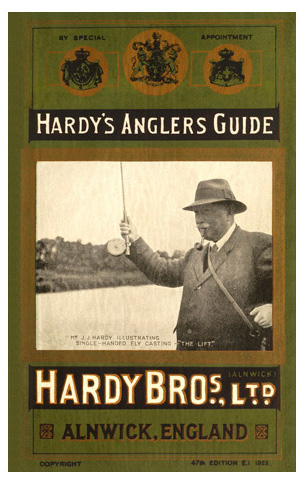 Image from wildwood
Medicinally the wood, bark, and resin have had nearly as many uses:
“Christopher Columbus found lignum vitae, or guaiacum, upon his arrival to the New World. Europeans perceived lignum vitae as a miracle cure for syphilis and hung pieces of the trees bark in churches as objects of devotion. The trees wood is so rich with fat and resins that objects made from it are self-lubricating and nearly impervious to water.
Native Americans used lignum vitae to treat tropical diseases. From the mid- to late 16th century in Europe, the bark became popular as a treatment for syphilis. It is a traditional British treatment for rheumatoid arthritis and gout. In folk medicine, people used guaiac resin to treat respiratory problems and skin disorders. A derivative has been used in cough medicines. Lignum vitae also has served as an anti-inflammatory, a local anesthetic, and a help for herpes. Lignum vitae is subject to legal restrictions in some countries.
Used in Europe, especially in Britain, as a remedy for arthritic and rheumatic conditions, lignum vitae has anti-inflammatory properties that help to reduce joint pain and swelling. Lignum vitae is also diuretic, laxative, and sweat-inducing, and speeds the elimination of toxins, which makes it valuable for treating gout. Tincture of lignum vitae is used as a friction rub on rheumatic areas. Cotton balls moistened with the resin may be applied to aching teeth. A decoction of the wood chips acts as a local anesthetic, and is used to treat rheumatic joints and herpes blisters.”
Information found on herbs2000
Turks and Caicos Bush Medecine Man Aldon Higgs of Middle Caicos, image from salt cay blog 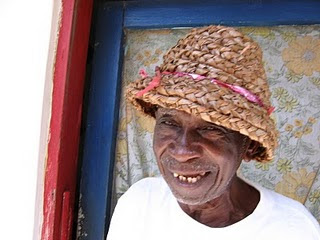 Information below from a Bahamian bush medicine article found on ravens voyage
LIGNUM VITAE (guaiacum off icinale) – Commonly referred
to as ‘ironwood
Lignum Vitae was considered the penicillin of the time. The
bark was chiefly used as a cathartic, the fruit as a vegetable
and the flower as a laxative. The white juice coming out of the
bark was used against a “scald head.” Nowadays, it is used as a
tea and as a bath for body pains. It is the most versatile
native Bahamian plant and
as many old folks call it “Nigly Whitey” – the national tree of
the Bahamas.
As referenced earlier, “healing” and “holy” historically have gone hand in hand.  In the thirteenth century St. Bonaventure, “the seraphic doctor” and one of the greatest philosophers and theologians of Christianity, wrote  a “text meant to aid the devout in conforming themselves to Christ through meditation on the events of his life, passion, and glorification.”  He called this text “Lignum Vitae” and with it inspired the diagram pictured below. 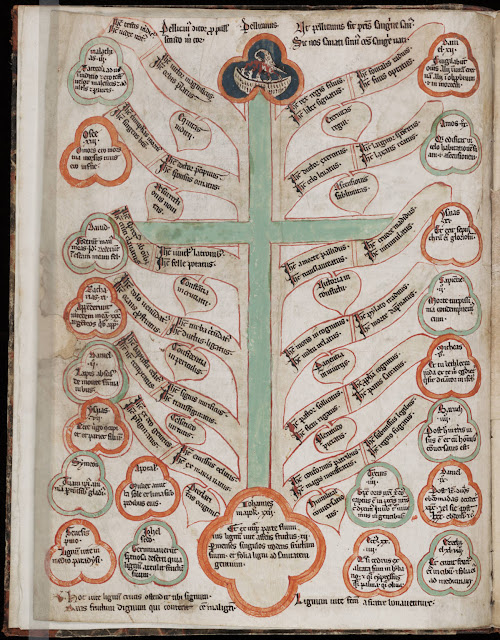 Image from ﻿beinecke.library, please follow the link for detailed views and fascinating descriptions.
Sadly, this honorable tree is on the endangered species list.  Information below from humanflowerproject

“Lignum vitae is actually disappearing all over the region: from Antigua (where it was cut down to make grinding parts for the island’s sugar mills) and from the Bahamas, where it also has “become scarce.” On St. Barth’s island, “the Gaiac, as it is locally called, is now a protected species.” In Florida, it has been “completely exterminated.”

Lignum vitae (“Wood of Life”) also was harvested, somewhat notoriously, for medicinal purposes. It was said that in his voyages to the New World, Christopher Columbus picked up both syphilis and its cure, a concoction of Lignum vitae (physicians and their patients soon discovered that the plant was palliative only).
To say the least, this plant has taken a human beating, and despite its durability, it now shows signs of defeat. Gerald Singer writes that in former days on St. John Island, “when someone’s problems were especially severe or when someone was carrying an extremely heavy emotional burden it was said that their troubles were ‘heavier than a Lingy Vitae cross.’”
Now that this indigenous tree has its own cross to bear, perhaps its beauty and strength will inspire people across the Caribbean to take up the cause of environmentalism, with conviction. In Barbados this past June, an island Environmental Society was formed. At the ceremony, Mo Watson called the natural world “the best psychiatrist….
“Ask anyone who gardens, who sea-bathes, snorkels or communes regularly with nature in other ways, how the experience makes he or she feel. Take a look at that sight out there. Sights like this inspire our hearts, minds and soul with wonder, gratitude, occasional unselfish reasoning and love. We ask ourselves why don’t we do it more often. Imagine it disappearing before your very eyes. And you being the last generation to enjoy and connect with the natural beauty of our Island.” 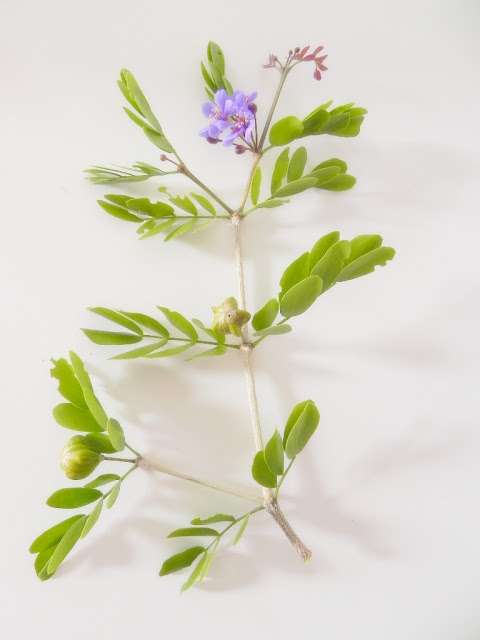 Can you imagine this beauty and amazing feat of nature disappearing?  Please protect this incredible species here in the Turks and Caicos Islands by spreading the knowledge.  Each field guide Friday will feature a custom artwork or woodwork to accompany the information.  The Lignum Vitae shadowbox below will be for sale at an upcoming market. 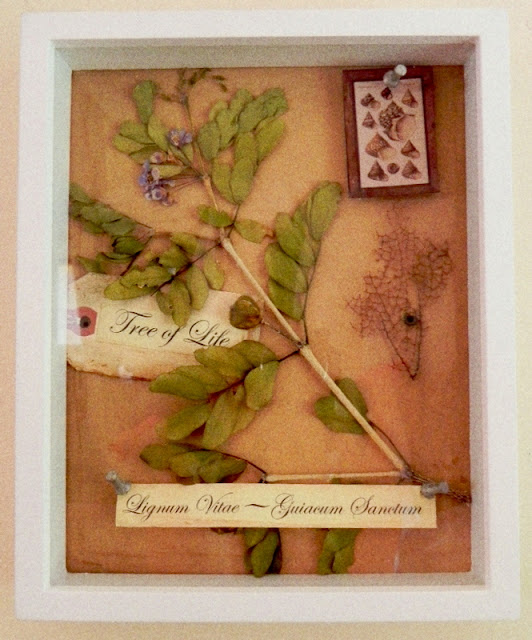 TC Millwork has a potential client who is looking to turn their dark cherry colored kitchen into a lighter and brighter look more appropriate for their oceanside location.  The couple was swayed after seeing a friends recently completed kitchen refinish. Realising the dramatic before and afters, they have had a hard time escaping the now seeded idea.  Luckily for us, their original cabinetry is of superior wood quality and craftsmanship so refinishing will be an easily warrantied work.  They know they would like a glazed look so here are a few samples and suggestions to help them decide which direction they may like to go. 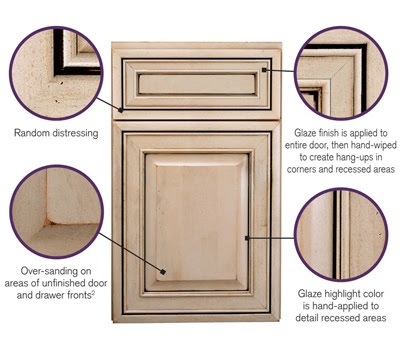 Image from here
The process of glazing is summarized by the above photo.  The quantity and the color combination are the two variants that need to be decided when going with a glazed look. 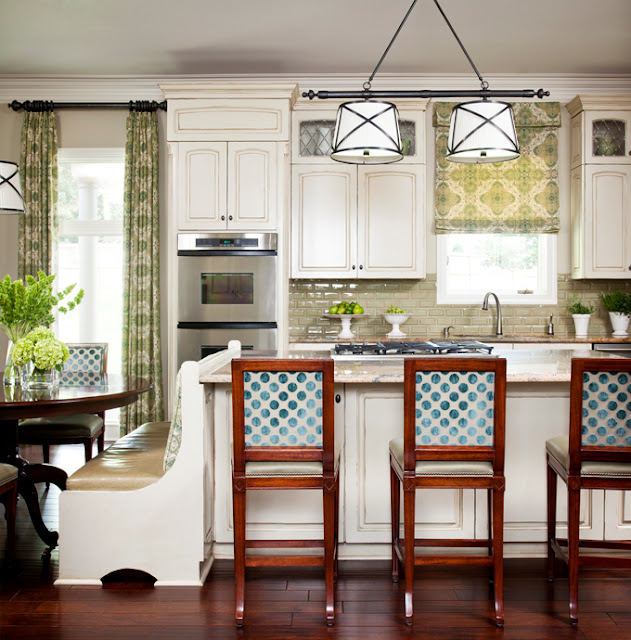 Image from houseofturquoise
The above kitchen features a very light glaze over an off-white lacquer﻿. 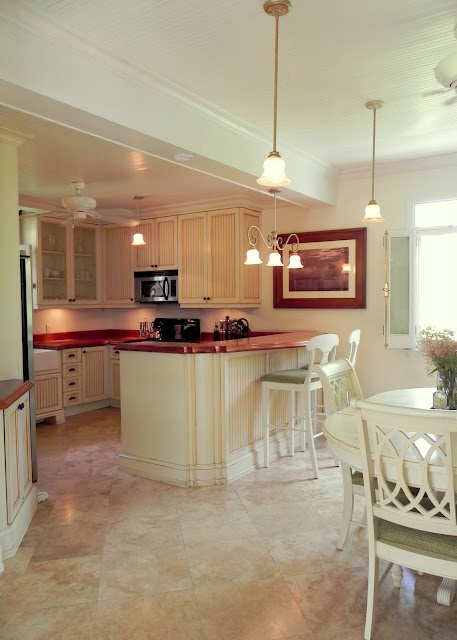 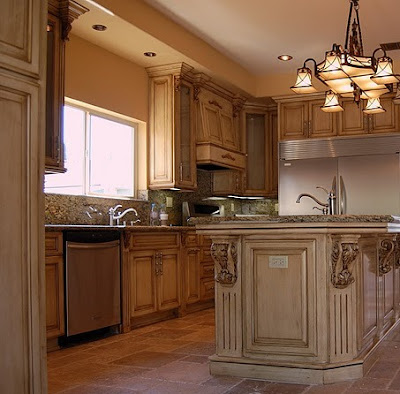 Image by Jake Gevorgian
The final image demonstrates a heavy glaze.  Clients must keep in mind the more ornamental details a kitchen has such as brackets, mouldings, columns, corbels, spindles, onlays, scrolls, or rosettes, the heavier the glaze will appear.
Once a light, moderate, or heavy glaze has been decided upon, the second factor to consider is the color combination of the glaze with the color of the cabinetry lacquer.  Both can be customized.  Commonly colors in the brown glaze family are paired with ivory finishes.  A new popular trend has been a charcoal glaze over a white finish. 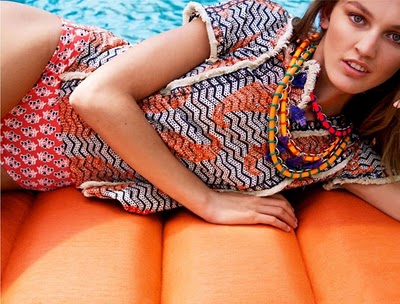 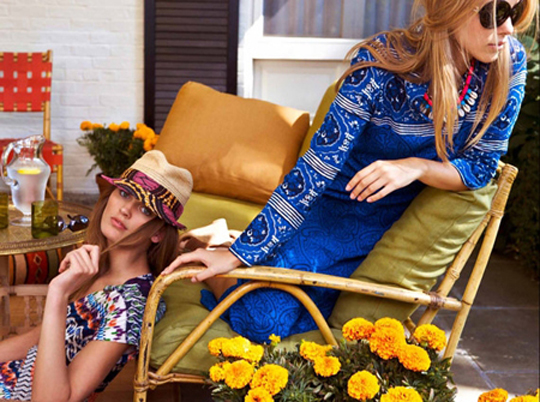 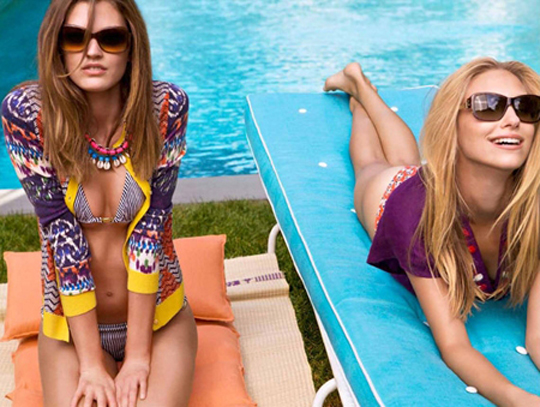 Above images from all things chic
The other half of our upcoming photo shoot will be marketing a hot new Providenciales boutique with an incredible collection of womens clothing, shoes, and accessories.  Our story will follow very much along the lines of “tropical island getaway.”  Here are a few of my inspirations that I think say just that.  Stay tuned for behind the scenes photos in the coming weeks. 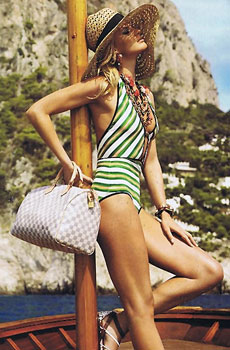 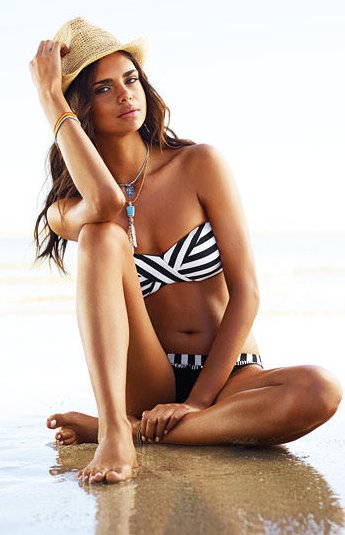 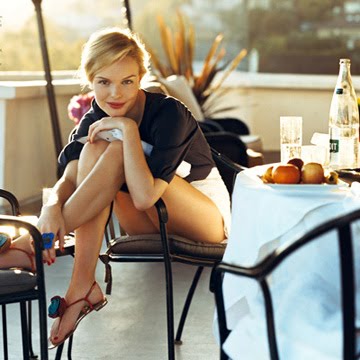 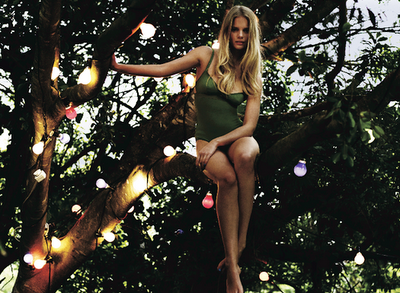 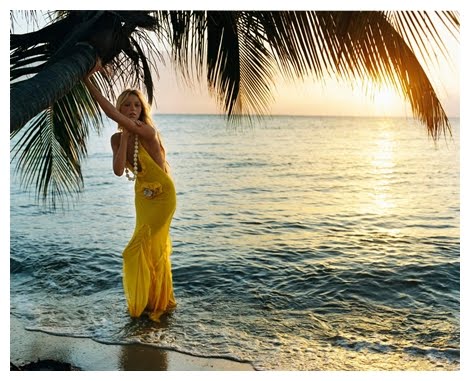