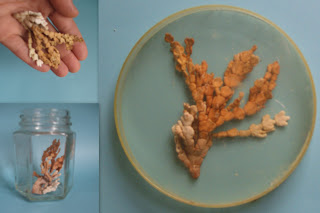 Sounds like something out of mythology, but Halimeda and Penicillus are not Greek gods, they are actually algae species, two of the most common in the Turks and Caicos. Using sunlight and chlorophyll they extract calcium carbonate from seawater. They grow rapidly but expire rapidly too, at which point the organic portion of the algae dissolves into crystals which are expelled onto the ocean floor. (I think that’s a visual to be filed for painting inspiration, crystals slowly meandering to the bottom of the sea). Halimeda segments make up a major component of sand, and Penicillus, particles of marl, the fine white mud covering the banks. The coral reefs surrounding the islands are also a calcium carbonate producer, simultaneously providing homes for many organisms that are also producing the shallow water carbonate; shellfish, sea urchins, and sponges. These results of sedimentation are how the Turks and Caicos Islands were formed, and are continuing to form today. As mountain peaks and most land masses are slowly shrinking from erosion, these islands are perpetually expanding. 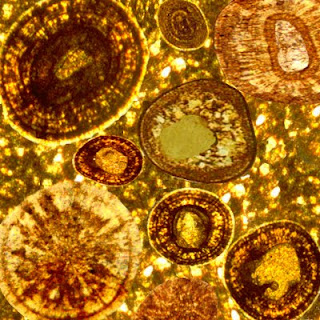 It seems only natural that the birth of this blog be about the birth of “Les Isles Caiquos,” the archipelago now known as the Turks and Caicos Islands. Looking at a globe you can barely see the specks, but scientists have discovered that these islands, and the Bahamas, never fit into the Pangaea puzzle, there simply was not room for them. Studies have found the majority of the continents contain volcanic rock that dates back billions of years, while the T.C.I. and the Bahamas contain rock, various types of limestone, only about 150 million years old, even from samples taken 20,000 feet underground. Limestone is comprised mainly of calcium carbonate which can be formed both chemically and biologically. Chemically speaking, calcium carbonate sweats, or forms precipitation, in shallow, warm sea water. A rise in sea temperature and a “gentle agitation of the wind over the banks” create tiny solid pellets called ooids (bet you never knew about that word). These ooids look like miniature eggs under the microscope (image above) and they float around gathering layers of calcium carbonate until they have enough weight to sink to the bottom, where they pick up additional minerals from the seabed. If your planning on taking a walk on Grace Bay beach, your bare feet will be immersed in oolitic sand, you’ll be strolling on a pile it took hundreds of thousands of years to create. More to come on the biological contribution of limestone in forming the Turks and Caicos. This post is a summary of a portion of Brian Riggs article “Geology of the Turks and Caicos Islands.”