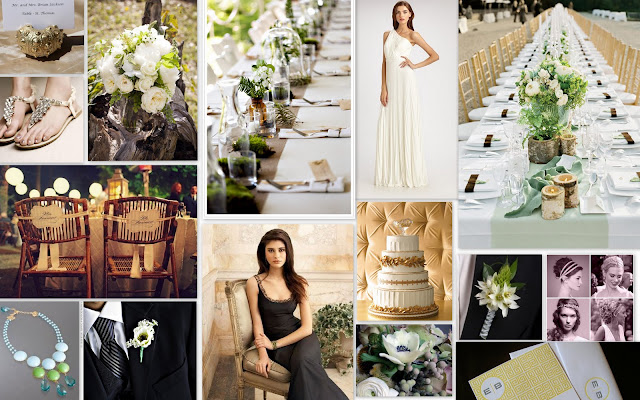 TC Millwork Design’s inspiration board
Gold urchin placecard from etsy, bouquet from Ben Godkin, tablescape from 100layercake, Grecian wedding gown by Carmen Marc Valvo, tablescape from brides inspiration gallery, Grecian hair inspiration, star of bethlehem boutonniere, invitations from anemone letterpress, anemone arrangement by saipua, Grecian cake from martha stewart weddings, black bridesmail dress by jlmcouture, anemone boutonniere via the knot, jewelry purchased by the bride for the bridesmaids, Mr and Mrs chair back signs from etsy
Way back in July of 2010 I received an e-mail from a bride to be who fell in love with Fleur de Lys Villa from photos and wanted to see the villa in person.  I met with Andy and Stephanie a short month later for the villa viewing.  After taking a quick peek at the beautiful beach access around the corner, they were both thrilled with the venue and we agreed to stay in touch.  After a few weeks, and a rowdy hurricane, our story took a dramatic twist.  After hearing first hand all the trials and tribulations this couple had endured, (their December 2009 wedding had been postponed due to Stephanie’s diagnosis with thyroid cancer), I was absolutely gutted to tell the lovebirds we had received an offer we could not refuse; a year long lease by a savvy, successful tenant we clicked with on our first introduction.  Originally Andy and Stephanie had planned to host their wedding at Footprints on the Beach, with the clean, contemporary style of the villa highlighted by the vivid turquoise sea as their background.  Their reception was to be held in the lush Caribbean courtyard of Fleur de Lys. The change of plans meant both functions would be held at Footprints, a chic location that would work famously regardless. 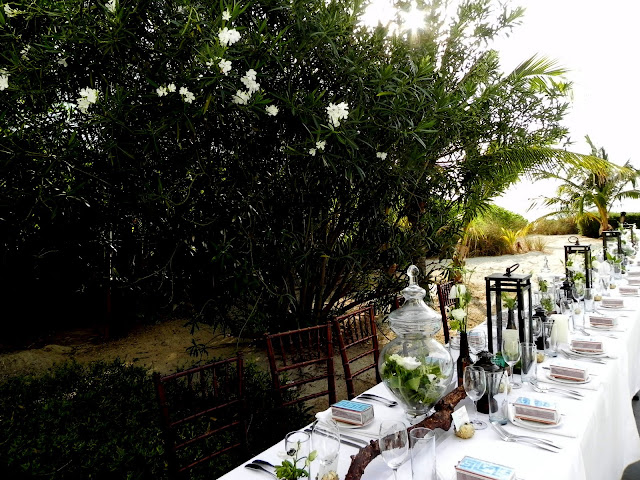 With that in mind, I started on the tablescape design. I knew I wanted to re-create the lush, romantic garden ambiance of Fleur de Lys so this deserving couple could have both styles as the originally intended.  I wanted them to be able to have their cake and eat it too!    Indeed it was a very full table of florals, dark stained driftwood, lanterns, apothecary jars, and a collection of glass bottles found on several beach combing expeditions. 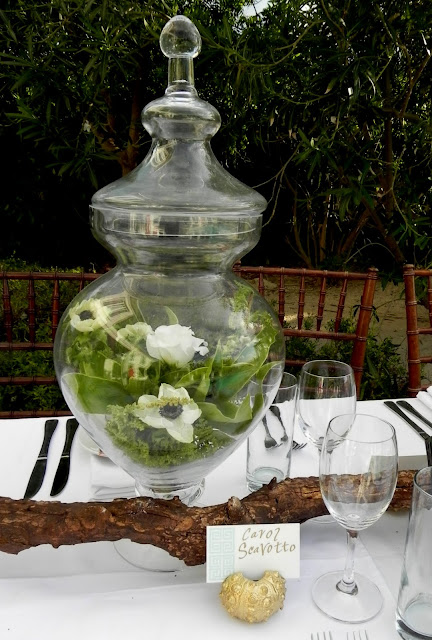 Placecards were hand scripted and the gold sea urchin holders were made by an etsy vendor.  The apothecary jars were filled with succulents from the Fleur de Lys courtyard, white lisanthus, grand bulbous buds of chincherinchee, and the show stealer; white anemones with black centers to coordinate with the black gowns that were originally intended for the December 2009 wedding. 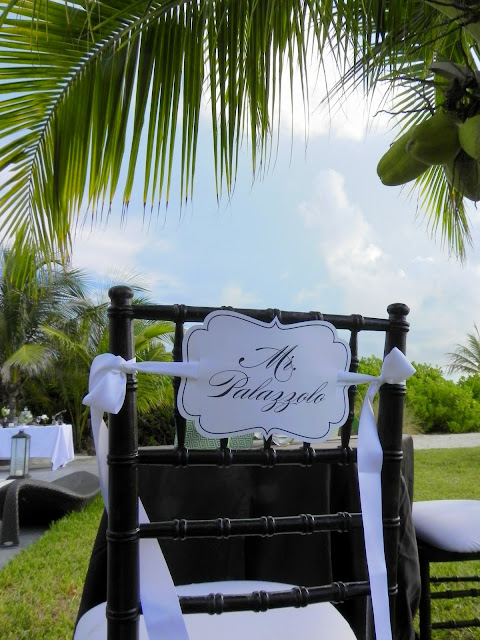 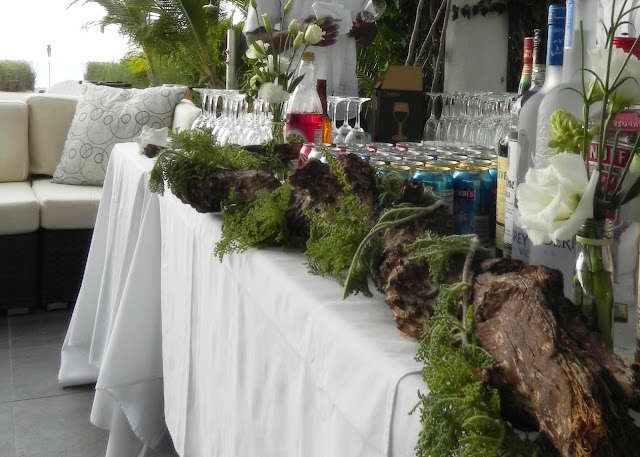 The reception was catered by the always incredible kissing fish, who I must thank for letting me have my way with the bar front and who also managed quite nicely with the limited table space I left for their plates of delicious food! 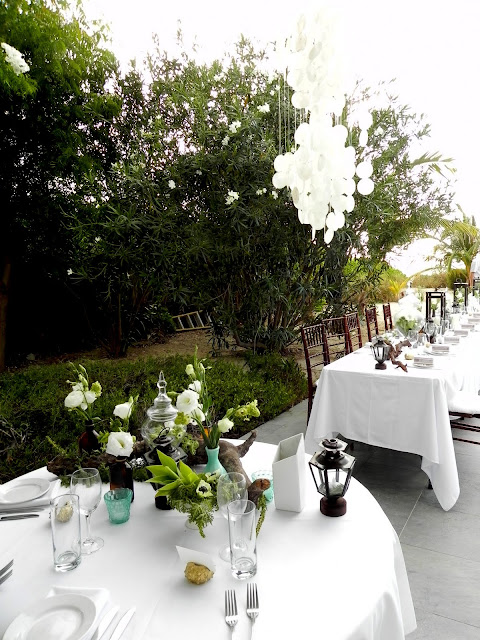 A white capeze shell chandelier was hung over the bride and groom’s table for two. 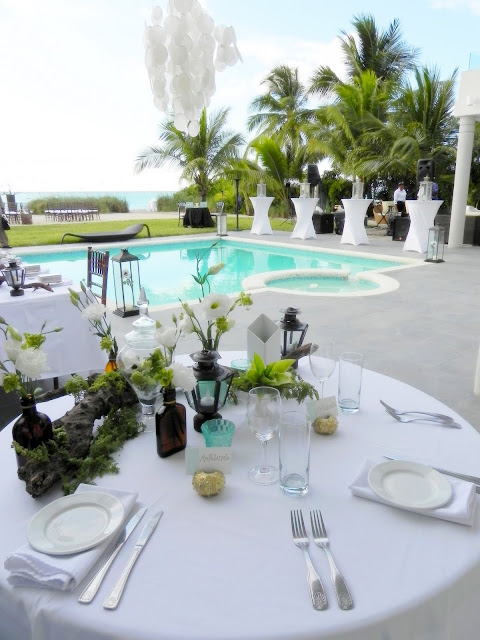 This little table was placed perfectly to soak in the entire scene; pool, band, dance floor, and the ocean. 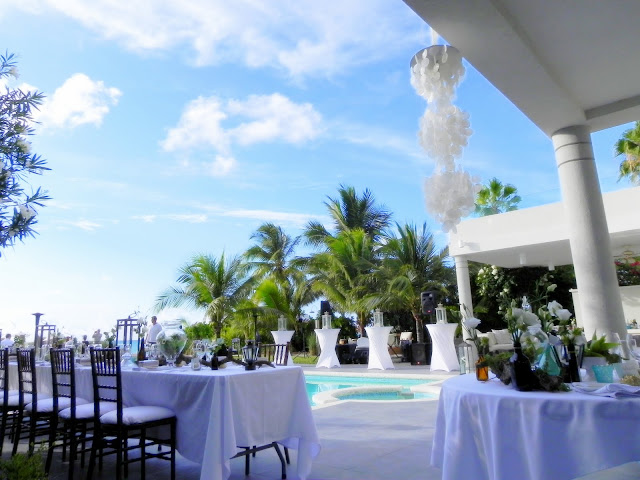 A rainstorm threatened our lovely laid out plans at 3:30pm.  At precisely 4pm we made the now or never decision to hope for the best, stay calm and carry on!  Wise decision as not a drop fell for the rest of the momentous evening. 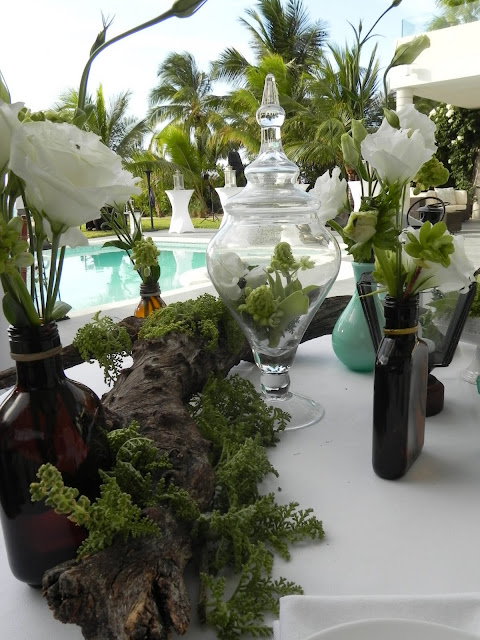 Driftwood and foliage details of the sweetheart table. 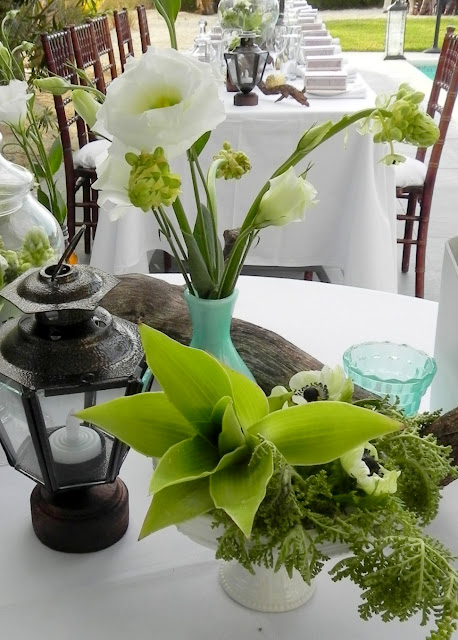 Earlier I mentioned the creme de la creme flower of this wedding, the white anemones with black centers. These are the pair of lovelies pictured above in the porcelain dish on the right.  Five days before THE big day, Environmental Arts had some stunning news for me; the same anemones ordered for an earlier wedding had made their journey but arrived in less than perfect condition, far from favorable with browning leaves and slime covering the stems.  My heart sank and I spent the entire weekend trying to come up with an alternative flower . . . . white dogwood with dark stems?  Not available.  White magnolias with twisting and turning espresso branches?  Not available either.  I had to face it, there simply was no replacement for these dainty, perfect little blossoms.  By Sunday night I had called and left messages with every floral supplier listed in South Florida for both faux and real anemones.  The majority of Monday was spent on the phone, with suppliers from across the US.  The cold hard facts were that these picturesque anemones had just finished their season, earlier than expected, and were in very large demand and the most lively looking artificials were able to make it in time but the shipping alone was going to cost three times the price of the original budget. 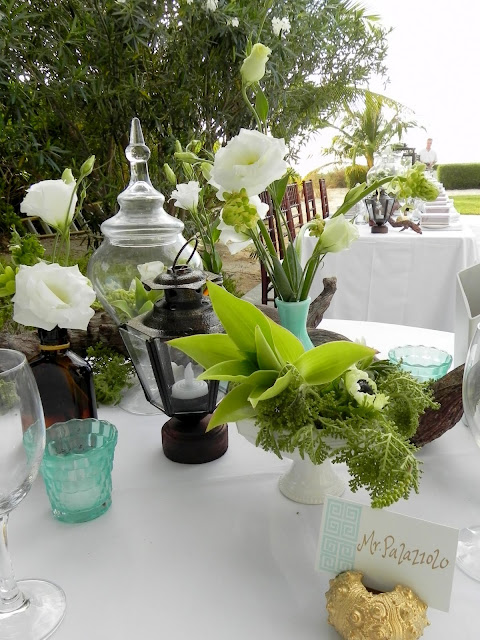 I had almost admitted defeat when an e-mail from dear old dad popped into my inbox.  His message read that he would be fed-exing some mail from Wyoming and to be on the lookout for it.  Wait a minute . . . . they might just have artificial anemones in Wyoming!  I knew it was a stretch but I called up the local Casper Hobby Lobby and spoke with the floral department.  Yes, they have something called anemones!  Yes, they have white petals and a black center!!  Can they send me a photo?  No.  Call to dad.   ME: “can you go to Hobby Lobby in a hurry, take a photo of this anemone, send the photo to me, then possibly buy the entire stock they have, and fed-ex the box to get here by Thursday???”  Dad:  “no sweat baby!” 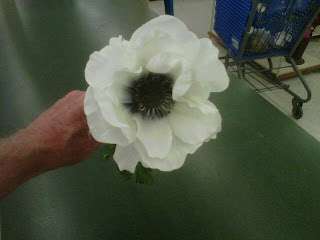 Dad’s photo proved that indeed we had the right flower and off they were shipped. 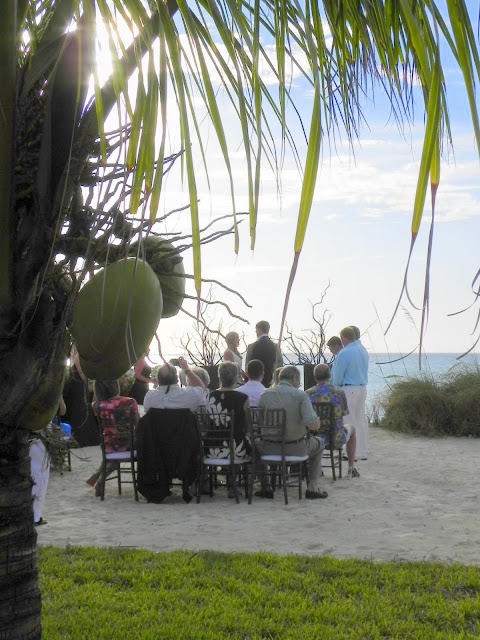 On Tuesday morning I miraculously received a call from Environmental Arts that their supplier had a box of anemones just arrived and they looked splendid.  They were soon on their way to the island after all! 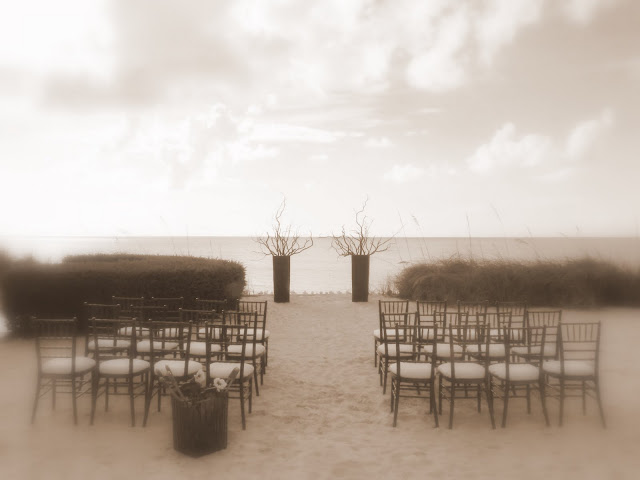 Not only did we have the precious and now very appreciated real anemones, we also had 9 stems of the faux to get creative and set the scene.  Here a pair are on the parasol basket; a perfect placement as they were far larger than the real so made a stronger visual impact for the hundreds of photos that ensued.  Thanks dad!  Your my hero every day, not just for this weddings save the day! 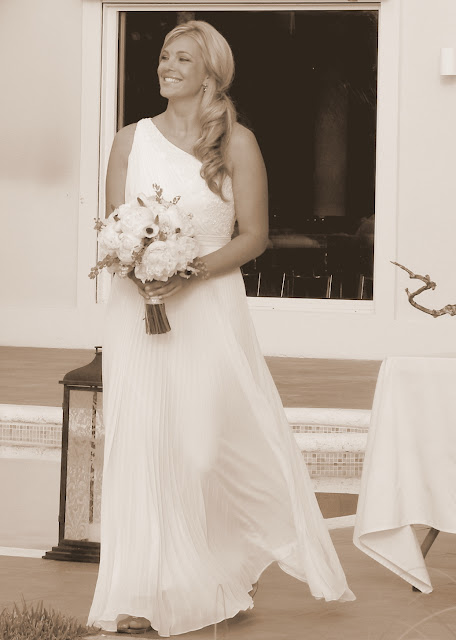 Stephanie truly looked the part of a Grecian goddess! 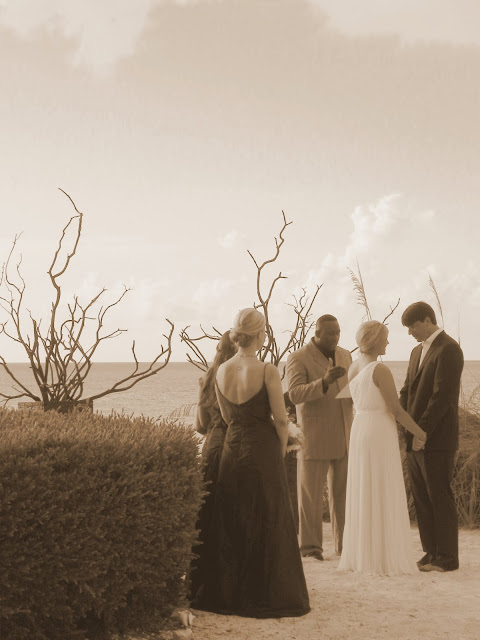 For the ceremony Stephanie knew she wanted to keep the decor minimal to not take away from the view.  In her gallery of inspirations she sent there was one photo of a pair of urns holding towering branches on either side of the aisle.  I knew this would be this couples ideal set-up as Stephanie is 6′ tall or more in flats and Andy must be well over 6’5.”  (Pastor Padmore is around 6’4″ for reference)  Almost any minimal decor would look  . . . . well, TOO minimal next to these two statuesque physiques. 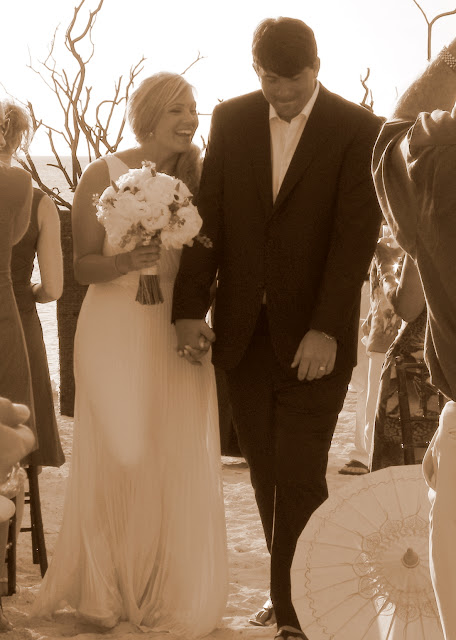 Not only are they tall, they are also blessedly elegant!  All who witnessed this special occassion can clearly see these two are seamlessly matched. 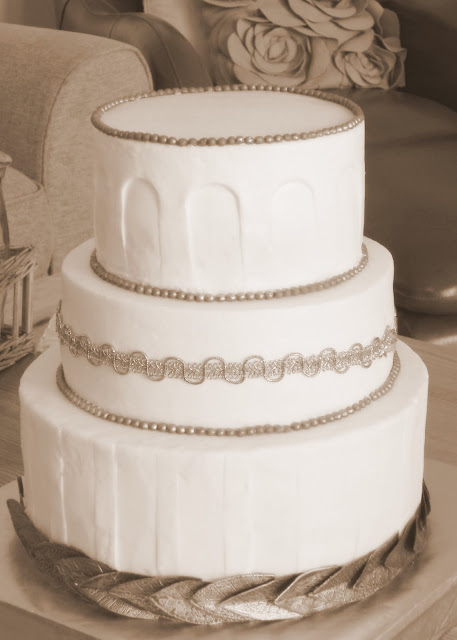 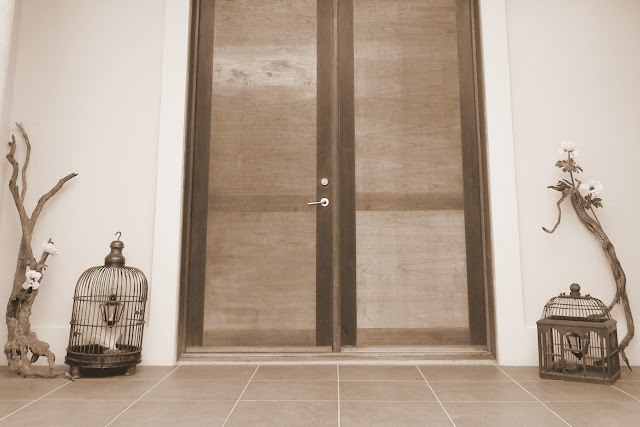 Stephanie also had several photos of lovely birdcages in her inspiration gallery.  We put these to good use welcoming the guests as they arrived. 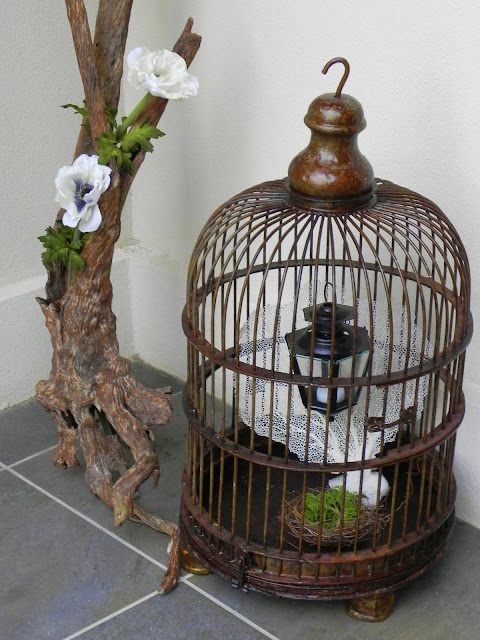 The little lanterns created a warm glow for guests exit as well. 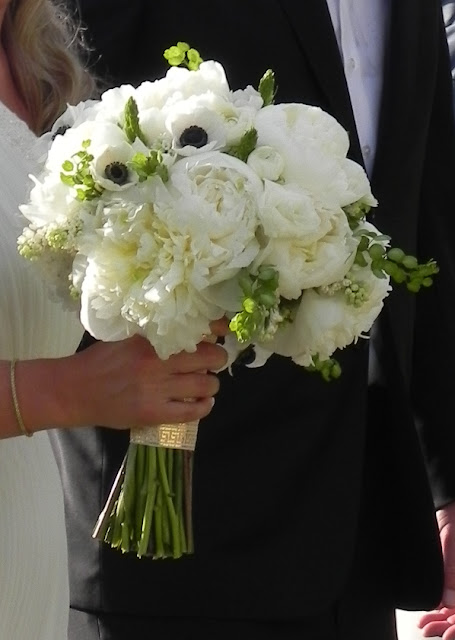 Stephanie had the general idea for the bouquets in that she knew she wanted primarily white, fluffy, and round in shape.  I requested Environmental Arts use a dash of white anemones amongst white peonies, white rananculus with green cores, chincherinchee blossoms with their little black bead centers, and white stars of bethlehem.  They made the wonderful suggestion of adding mini coin crest and green lilacs for accent color.  Stephanie brought the Greek key patterned gold and white ribbon which made the bouquets much more unique than the standard white trim. 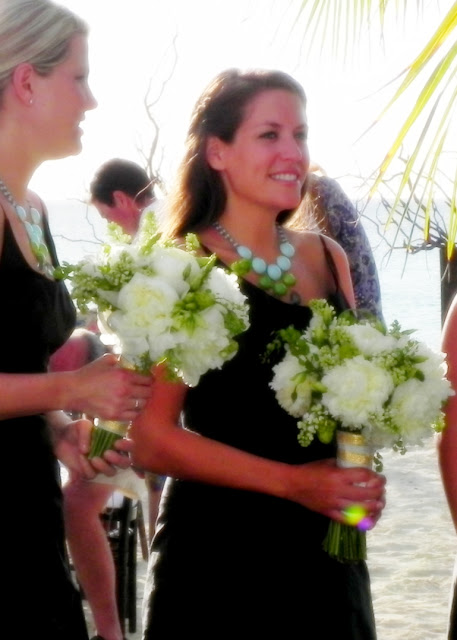 The bridesmaid bouquets were slightly smaller versions of the bridal bouquet, minus the infamous white anemones!  Not only were the bouquets oh-so-pretty, they smelled heavenly! 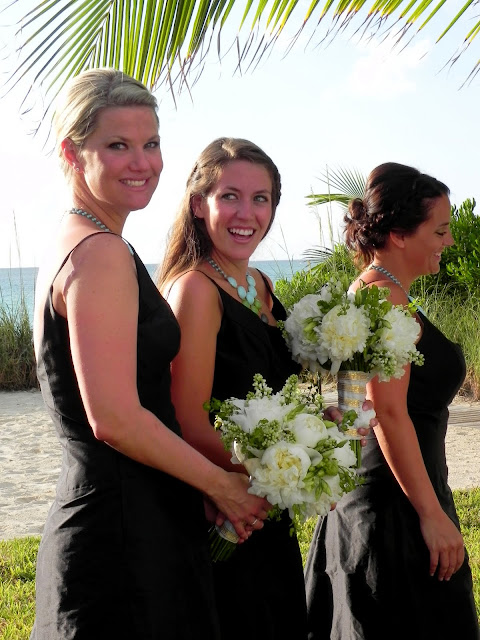 Very early on in our style discussions, the intentions were to give the originally December wedding intended black gowns a more relaxed look with accessories.  Beaded necklines were removed and Stephanie found these bold, fun aqua and lime necklaces and earrings that did the trick with panache.  To go along with the spectacular Grecian one shoulder gown she herself decided on, the entire bridal party wore jeweled sandals which not only looked great, were very practical for the beach. 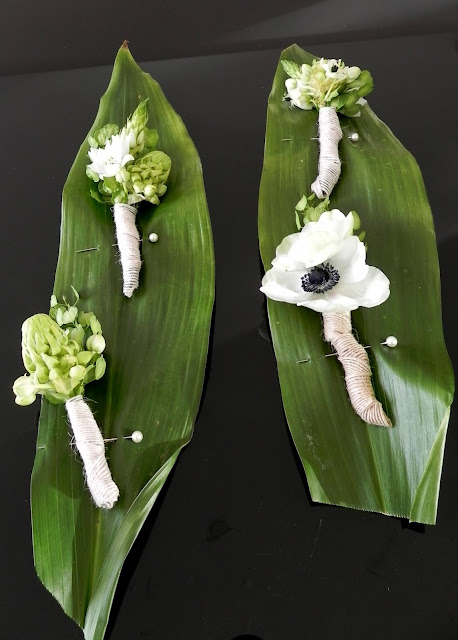 Environmental Arts did a highly impressive job with the style of boutonniere I specified, I just adore them!  I believe this detail should not be made with overly feminine and fluffy flowers.  I prefer the men to wear a style complimentary to a wedding yet a touch masculine, more graphic and simple in shape and finished with more natural or organic details like the twine you see here. 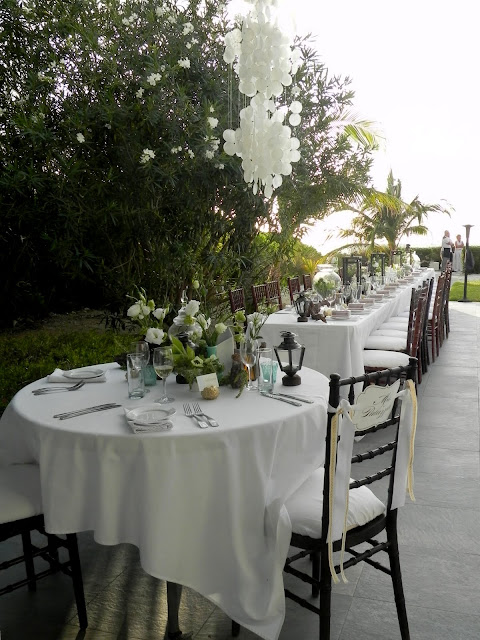 This photo displays that the ultimate goal was very much achieved.  Here you have it; a glowing tropically lush and woodsy tablescape amongst  . . . 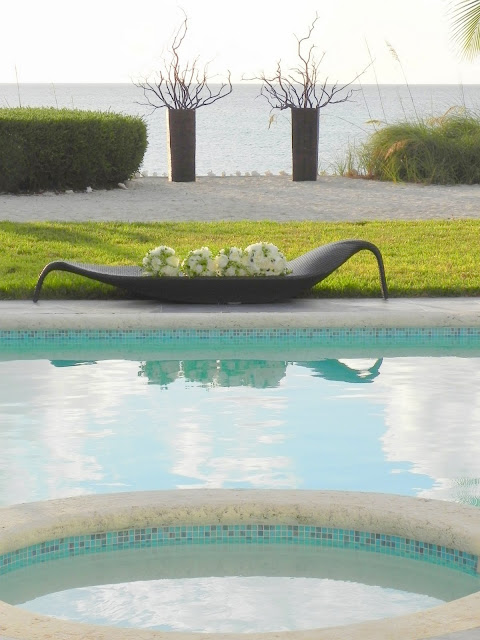 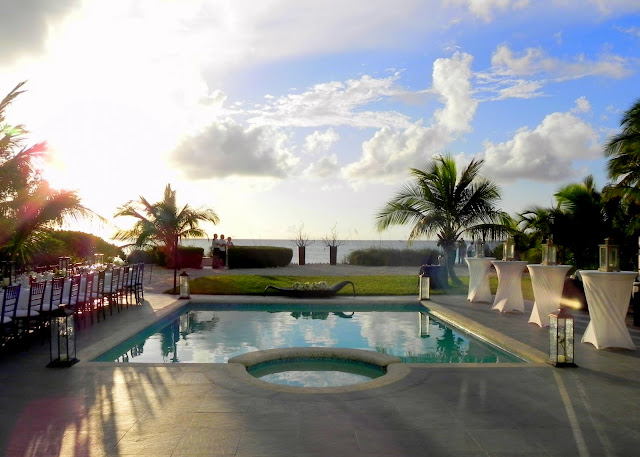 With the right stylist, anything is possible!  ﻿
TC Millwork Design would like to thank this gracious couple for the fabulous opportunity to turn their dream into reality.  We would also like to thank all the vendors and assistants that made this wedding possible.  BIg thanks to all the super friendly bridesmaids and guests who we chatted with and who offered help!  Stephanie and Andy, we wish you all the best and hope to see you back in the Turks and Caicos soon!
All images by Stacie, please stay tuned for the far more spectacular and justice giving images to come from the professionals at http://www.brilliant.tc/