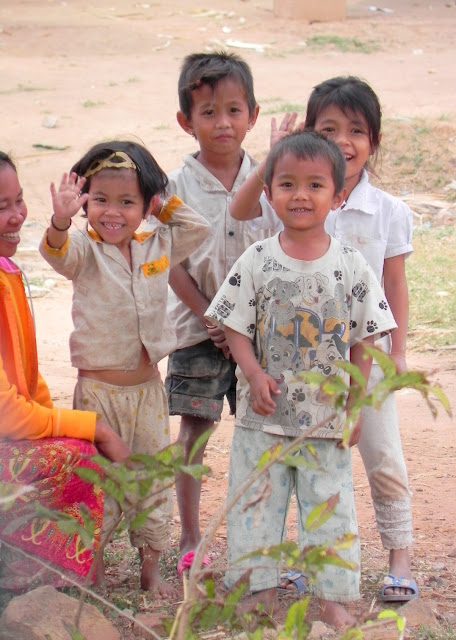 Waving children on the road 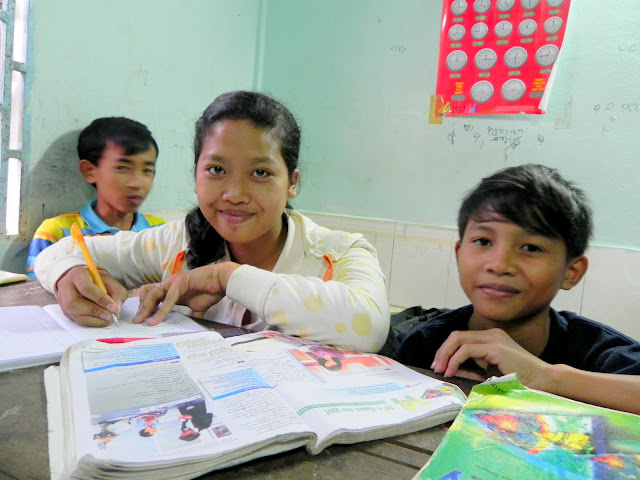 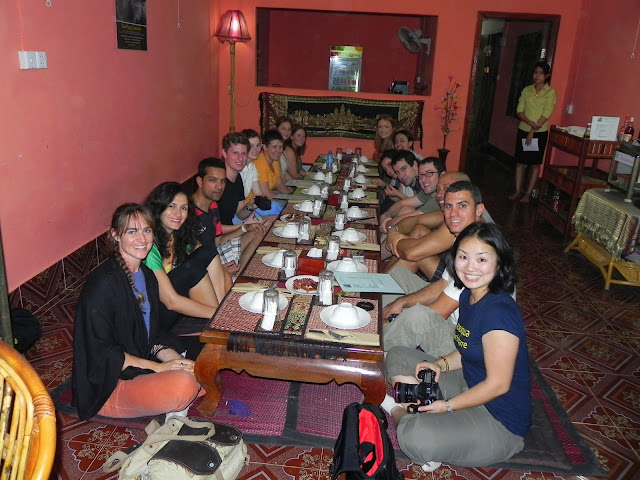 Our group sits down to dinner at the New Hope restaurant, a brand new facility that will help fund the organisations many efforts

Our first day in Cambodia was spent in Siem Reap, a city of 750,000 with a very distinctive visual line drawn between the haves; large modern hotels with well manicured front entrances dotted with tourists, and the have-nots, dusty dirt roads lined with shanties frequented by shoeless children.  We arrived late in the afternoon and went directly to a grass roots NGO, New Hope Cambodia,  where we stepped into the schools classrooms and joined the kids in their English lessons.  They were a smiling, talkative bunch and we took turns asking all kinds of questions.  Their English was amazing, their stories were sad.  The majority of students were orphans, having lost their parents to war or disease.  Thanks to this organisation 150 children are receiving an education, 180 impoverished families are receiving food, and up to 100 sick per day are being treated with medical care.  After class we headed over to a freshly built one room restaurant and listened to the volunteers talk more about what New Hope does and what we can do to help.  This is a truly remarkable organisation with far reaching goals, please consider making a donation here. 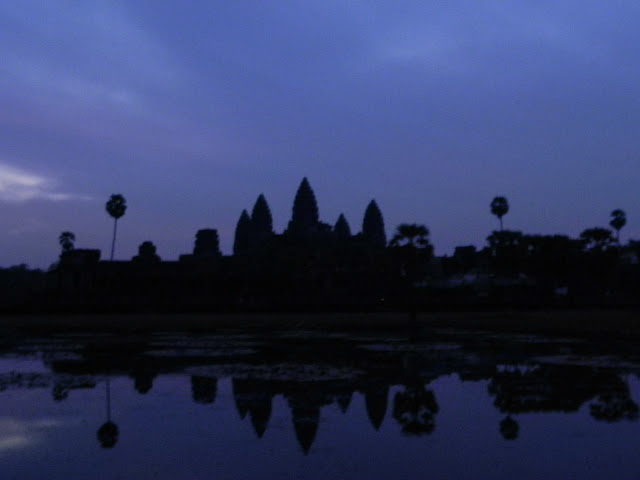 Angkor Wat slowly revealing itself with the sunrise 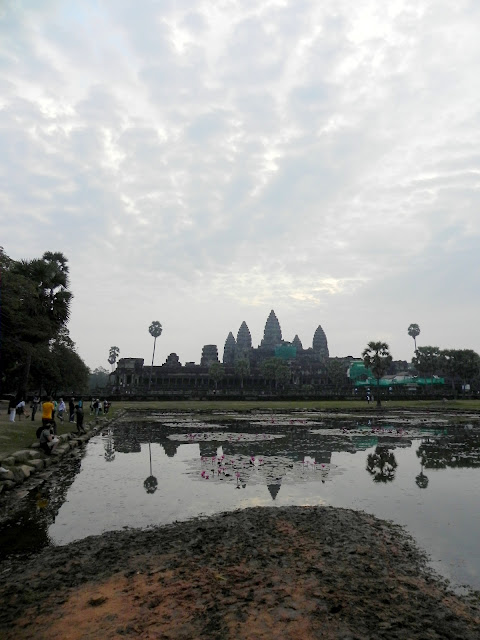 At 4am in the pitch dark the following morning, armed with a headlamp and a flashlight, we were crossing the threshold of the largest religious monument ever constructed, the capital of the Khmer kingdom from 802 to 1295.  I had grand notions of what to expect at Angkor Wat, literally “city temple,” quite fitting considering the entire complex is a spansive 37 square mile city in itself, tough to navigate purely in a day.  Once the sun started to spread light on a temple fronted by massive ponds, (water storage vital to the inhabitants in it’s days of glory) every minute added excitement.  We traversed through the highlights, each more impressive than the last.  Every wall of every temple was something to marvel; stone reliefs told mysterious stories of the past, the detail mind boggling when considering the vast quantity contained in the entire complex. And speaking of pictures, they can’t begin to give the experience justice but please see below. From wikipedia:

One of the first Western visitors to the temple was Antonio da Magdalena, a Portuguese monk who visited in 1586 and said that it “is of such extraordinary construction that it is not possible to describe it with a pen, particularly since it is like no other building in the world. It has towers and decoration and all the refinements which the human genius can conceive of”.[5]
However, the temple was popularised in the West only in the mid-19th century on the publication of Henri Mouhot’s travel notes. The French explorer wrote of it:
“One of these temples—a rival to that of Solomon, and erected by some ancient Michelangelo—might take an honourable place beside our most beautiful buildings. It is grander than anything left to us by Greece or Rome, and presents a sad contrast to the state of barbarism in which the nation is now plunged.”[6] 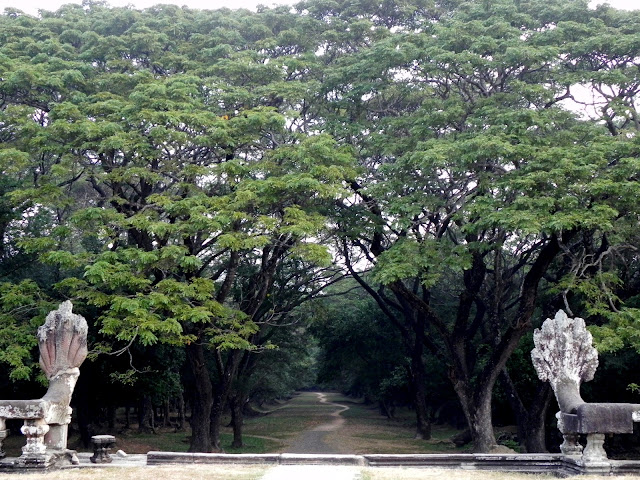 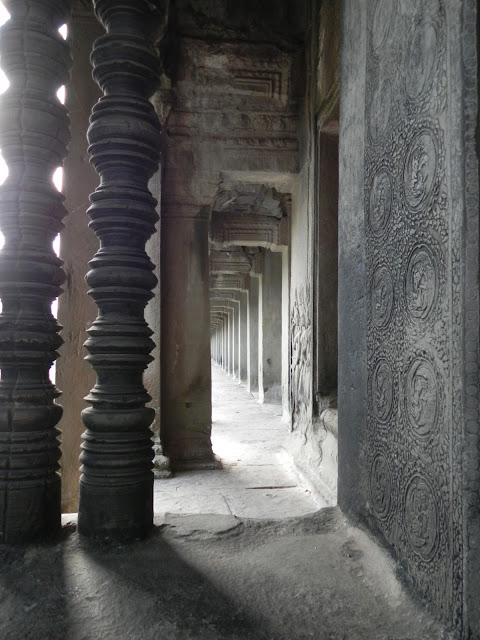 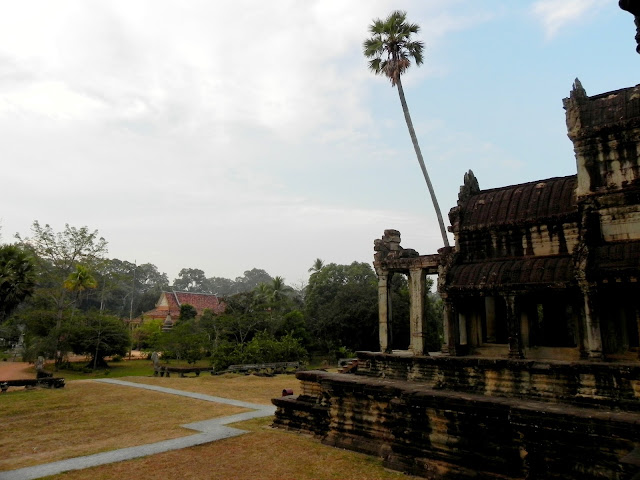 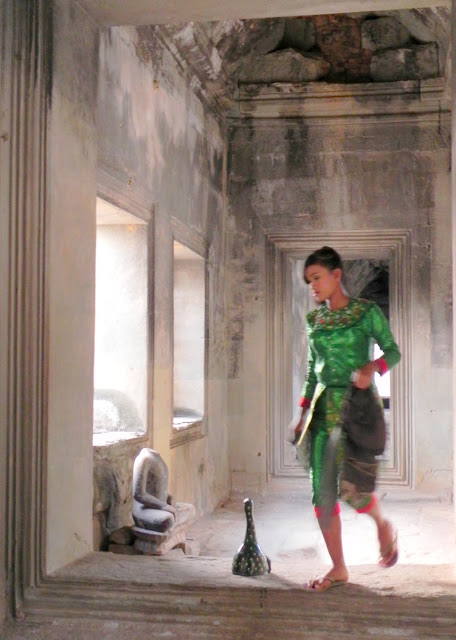 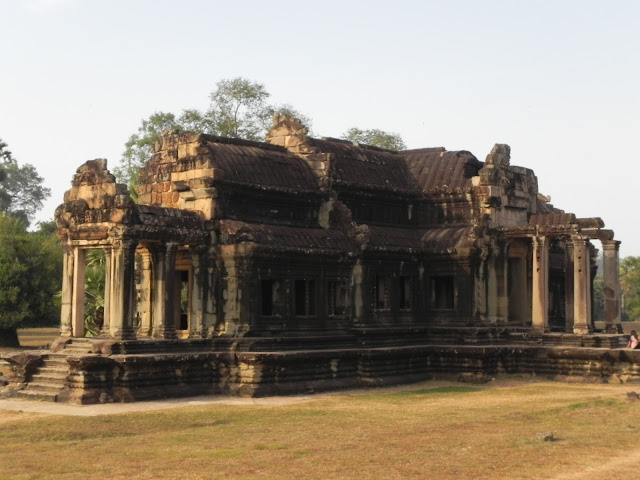 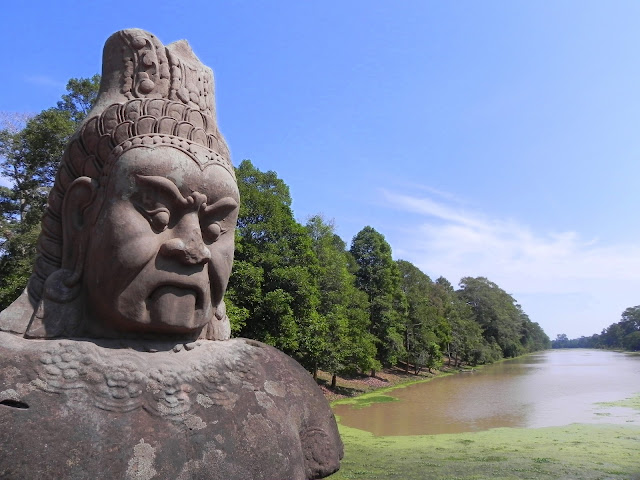 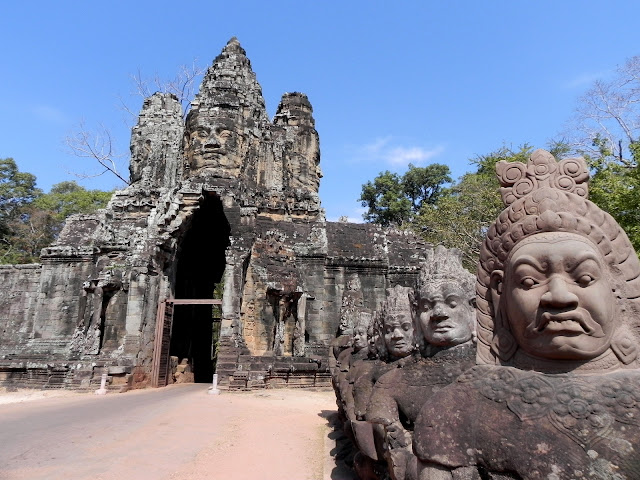 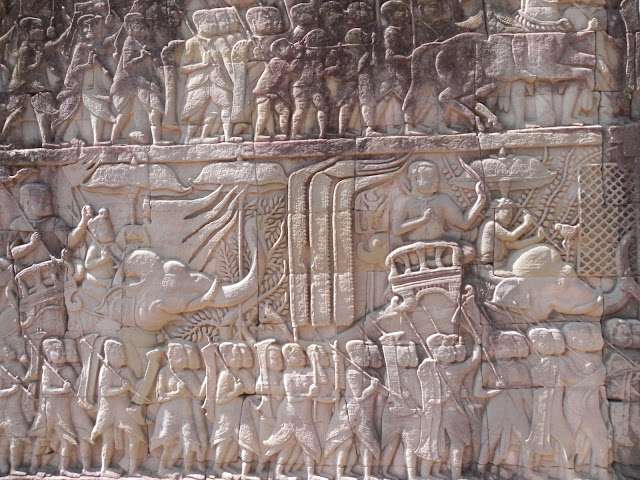 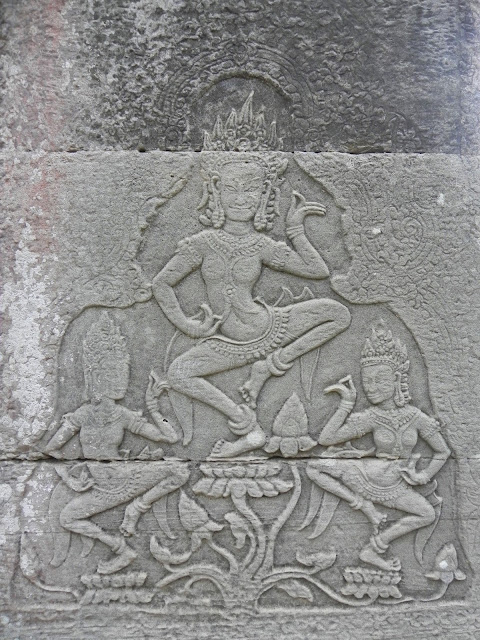 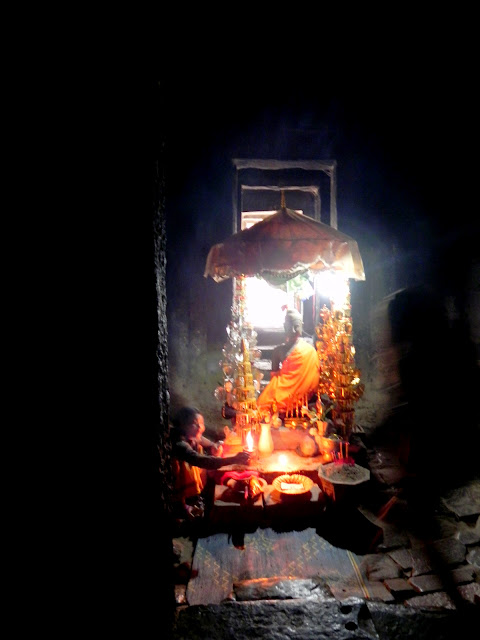 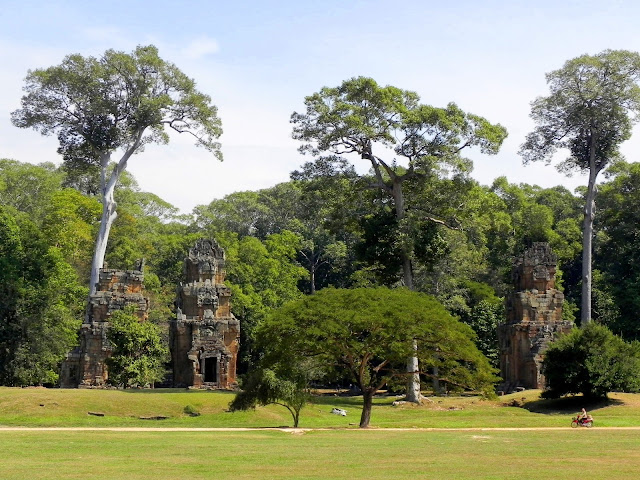 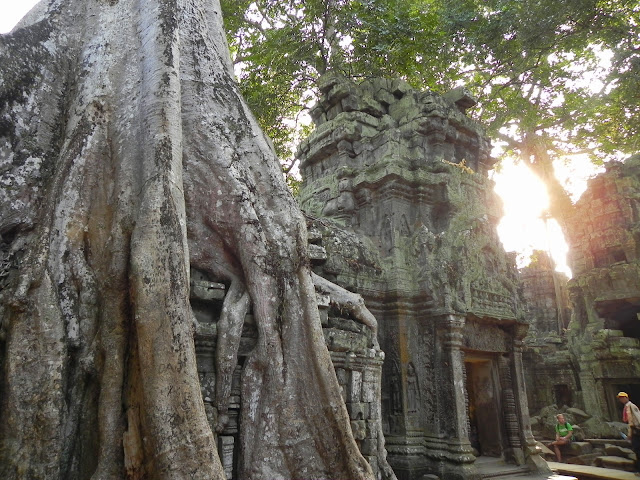 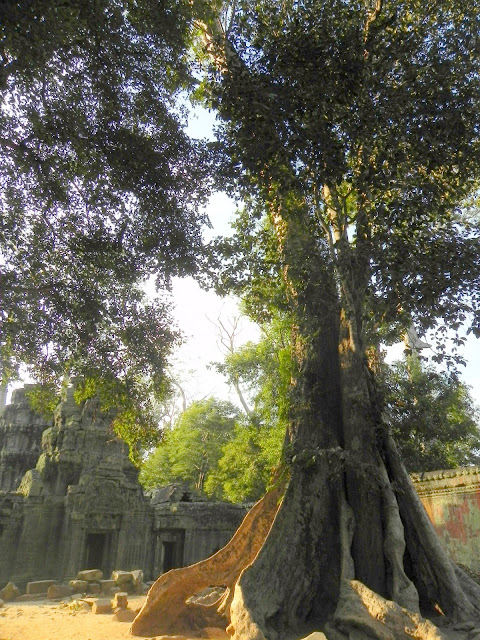 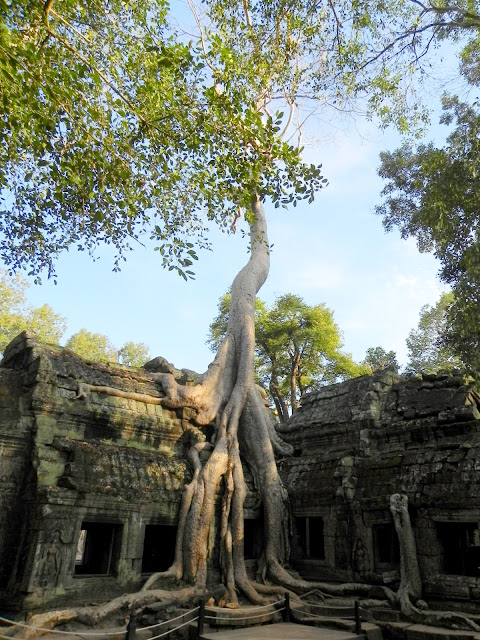