The letter S is a very appropriate starter for the month of September; Sticky, Smoldering hot, and Stuck to Stormpulse.  Hey, they don’t call this Silly Season in the Turks and Caicos Islands for nothing!  This month is known for being the yearly breather.  You will see many businesses and restaurants close for the month, traffic slows, and many islanders take extended holidays.  So I have surprised even myself that this has been the busiest time for me yet in 2010 (hence the 10 days with no postings).  At the tail end of August we received very big news regarding Fleur de Lys.  A professional islander wanted to view the house for the purpose of a year long rental, which we had considered in the past but didn’t pursue with much vigor.  After an amazing first impression and mutual instant liking of one to the other, the deal has been sealed and the lease has been signed!  All parties are extremely excited for this monumental change, and the villa is getting a facelift in preparation.  One of the major changes: 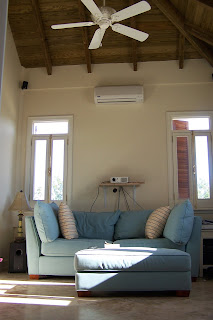 BEFORE
Here is one of the guest bedrooms in 2005.  Originally it was intended to be an office/media room/spare bedroom but as time marched on it had less need as a multi function room as the home theatre was moved to the living room and the upstairs patio was converted to an office. 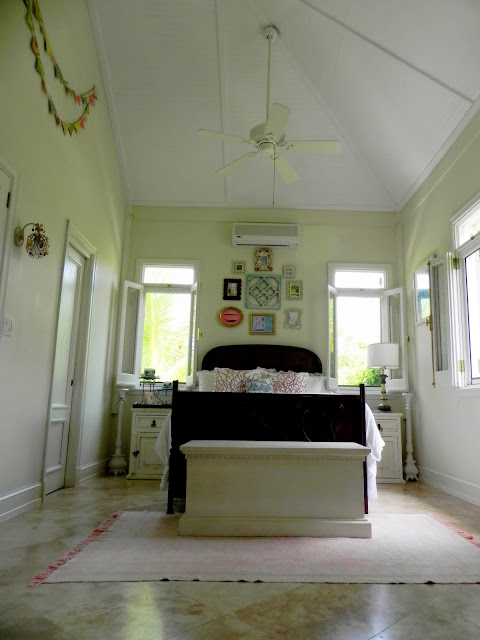 AFTER
The guest wing of the house was the only portion that had not been insulated, and especially come September, one could feel the dramatic temperature difference between the rooms that were and were not.  We spent a week laying the insulation, and another week installing a beadboard ceiling with a final brushed coat of white paint.  Now not only does the room look  brighter and airier, it feels much cooler and will be far more efficient to run A/C the few times out of the year when it’s necessary.   Many more villa before and after photos to come in future postings.