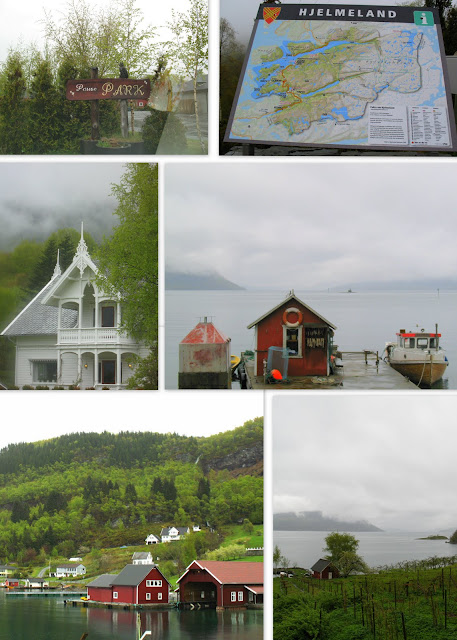 All images by Pepper Key Stacie
My great grandfather Jacob Aanen Steensland was born September 26, 1879 in Hjelmeland, Rogaland County, Norway.  Although I wish I would have been able to find more information on the exact place of his birth or the family farm, it was remarkable just to lay eyes on the region of our roots.  Jacobs father was Aenen Jorgensen Stensland, and mother was Borghild Larsdatter Tuntlandsvikane (how’s that for a name!) and they, like many Stenslands or Steinslands, changed their spellings to Steensland after moving to America.  I have always found the Norwegian pronunciation easier on the tongue and the ears.
Hjelmeland is known for it’s fruit production; apples, plums, pears, strawberries, and cherries but salmon, cod, and halibut have been important to the fishing industry.  The coat of arms depicts a red shield with plaits of straw, based on the local tradition of furniture making, symbolising the strength and solidarity of the municipality.  These famous chairs with seats of woven twigs, jaerstolen, are still being produced today.
Reading Summer Light I found a treasure chest of personal parallels.  I grew up in Wyoming; the mountainous and mineral rich equality state, the 10th largest in square mileage but the least populated, and a racially undiverse population at that. Norway, like the rest of Scandinavia, is large but relatively sparsely populated, mountainous and rich in natural resources.  It is a notably egalitarian country, most likely stemming from the Viking days when the farms and communities would be managed by the women while the men were off to sea. Norway is slowly changing but very recently was the most racially homogeneous nation in the world after Japan.  Wyoming has often been termed rough terrain and as the author writes “I ponder the fact that Norway’s character has emerged from it’s rugged terrain and fragmented coastline, and that the isolation imposed by it’s mountains and fjords strenthened it’s traditions.” (p.66) I think it’s fair to say Wyoming’s isolation from metropolitan areas has given it an identity all it’s own.  With the comparisons of geography and economy I caught myself comparing myself to the average Norwegian and discovered my bad habit of bartering down is classically Norwegian.   Farmers would start at a price lower than they wanted and wait for the buyer to suggest a higher price they would then agree on.  (if only I sold my works to other Norwegians:)  I found out the Steensland’s do it yourself nature is inherent; “Norwegians, probably because of their enforced isolation in many of the valleys and on the coastline, have developed a talent for being independent and this quality is reflected in their aptitude in building their own homes, putting on additions, restoring furniture, tending to a vegetable garden, making handicrafts, knitting, weaving, carving wood, and just about any other handyman pursuit.” (p. 177)  We share a distaste of plastic surgery, drunk driving, television, and the exploitation of women, and a reverence for fairness, reading, the great outdoors, and gender equality in the workplace and in the home!  The author clearly holds a great deal of respect for Norwegians, describing them as idealistic, good natured, earthy, and wholesome.  In a study a few years back, researchers left wallets with cash unattended in various countries in public places.  Norway was the only country that all five wallets were returned.