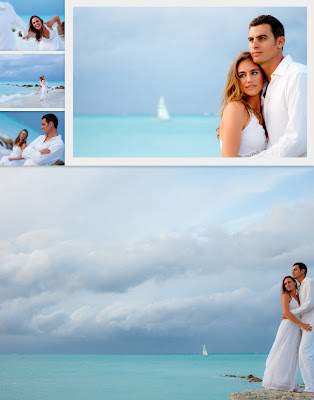 Our engagement session on Leeward beach, images by brilliant
Stephane and I met in 2003 when I had just moved to the Turks and Caicos Islands. I arrived on a 6 month set design contract and likewise, Stephane had reached the same destination in the same manner, as a carpenter for a village renovation in 1999. His travel route began in Quebec, mine in Wyoming with several city stops along the way. Though his first language was French, and shamefully my only language is (still) English, that little seed of connection and curiosity was firmly planted. Six years later, the garden had grown to exactly what we desired. In the summer of 2009 we decided it was time to take the plunge.
Our engagement session was an unusually overcast day in November. Brides, let these photos be the proof that a grey day doesn’t necessarily mean grey photos, as long as you have a great photographer. We could not believe our phenomenal luck when Beluga by chance came sailing by in our distant background. This beautiful Polynesian catamaran, with it’s signature green and white sail, was where we had one of our very first dates. Thanks to Stephane throwing me overboard at sunset, and the following retaliation shove off deck by our dear friend Captain Tim, we had no other choice but to snuggle up under a wool blanket for warmth. For couples seeking romance in the TCI, a sail aboard Beluga is sure not to disappoint and the hosts, Schooner and El Capitan, are guaranteed to entertain.