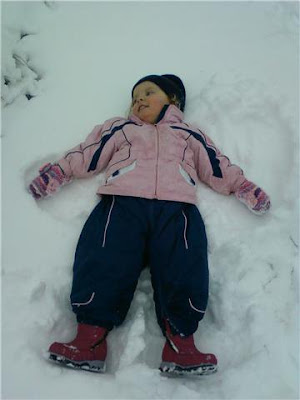 Photo by Jessica Bue-White via Facebook
Today I spoke with both my family in Wyoming who complained of clearing ice on their windshields and my in-laws in Quebec who have seen several solid hours of snowfall since this afternoon.  Both these scenarios sound divine! I want to be in adorable little Brae-Lynn’s boots right now, making a snow angel in crisp mountain air.  Instead I am still sweating, long after sundown, still hot after two cool showers, three dips in the pool, and several ice cold beverages.  It’s suddenly summer here in Turks and Caicos and being that it is only April, I simply refuse to turn on the A/C, a luxury we reserve for our hottest summer months in August and September.  I’ll make do with the ceiling fan, and I’ll get used to it as I do every season, just a little reminder to those out there in the cold . . . . the grass may be a shade of olive, lime, or forest, it’s all in the perspective.