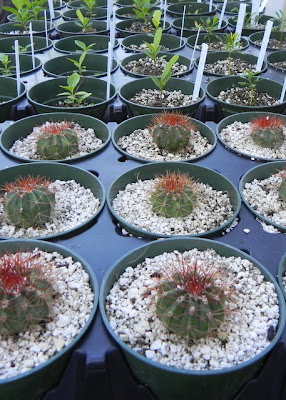 Saturday was a very busy day on the islands “thinking green” front.  As well as being International Coastal Clean-up Day, the TCI Environmental Club had our first native vegetation rescue mission.  The group of approximately 15 people met at 8am at the NEC where we saw the nursery and took a peak at many of the young plants there.  Brian Naqqi, the groups founder and a walking encyclopedia book of knowledge and information, took the time to show us around and answer questions. 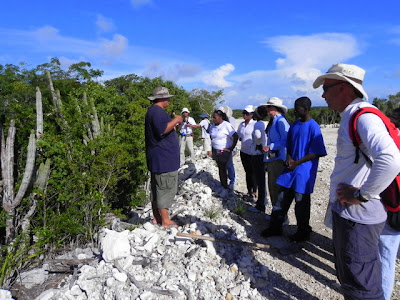 All images by pepperkeystacie
After arriving on site, Naqqi demonstrated how to properly remove orchids and pointed out a few species to be on the look out for, poisonwood included!  The group got started by spreading out into the bush, then someone would find something notable and we would gather around to see it and hear Naqqi explain that particular plants characteristics.  The morning was a delight; I learned a great deal and had so much fun while helping save some of the Turks and Caicos Islands treasured plantlife.  Here is Naqqi’s own detailed summary of the day’s events:

We had a great morning today, 25 September, collecting native plants from a development area. Many of these plants are globally threatened or endangered, or endemic to the TCI and Bahamas, so have a restricted worldwide range. Plants that were too big to relocate and bearing ripe fruit (two species) were rescued by seed collecting. Collecting largely focused on epiphytes, particularly Encyclia orchids and Tillandsia air plants.
The morning was great fun and I’m certain everyone learned a lot, I know I did! I think we all shared our experiences, knowledge, and familiarity with the bush and a passion for TCI’s plants.

During collection, plants were tagged with their botanical name, collection date, and area of provenance. After the collection, we moved the plants to DECR’s Endangered and Endemic Plant Rescue Nursery at the National Environmental Centre, where they were potted, counted, tagged, and catalogued.
Our rescue saved the following numbers and species of plants from likely destruction:

Whitewood, Drypetes diversifolia (TCI, Bahamas, and Florida endemic)
Also collected was the important find of a reproductive body (mushroom) of the mycorrhizal fungus associated with Encyclia orchids. This might now be identified to further our understanding of TCI’s botanical ecology.
Thanks to everyone who attended and helped out:

Special thanks to Denise Elmerich for willing to let your truck get dirty to carry lots of plants, and to Brenda Clare for showing us all a great example of preserving existing native vegetation for use in home landscaping.
We hope to have more activities coming up soon, and thanks for your participation!
B Naqqi Manco