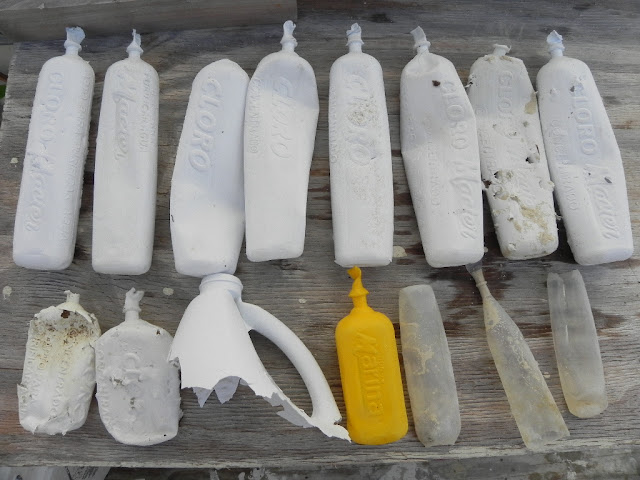 Last month I started seeing loads of bleach bottles washed up on Longbay beach.  I posted a message on the TCI Environmental Club and Rubbish Runners facebook pages, inquiring if others had been encountering the same issue.  The responses came pouring in.  I decided to take a count of the finds for the month of July.  The above photo was found my first week, tally of approximately one dozen bleach bottles, 1 vinegar bottle, and 3 unknown squeeze bottles.  As of yesterday, here is what that original list grew to: 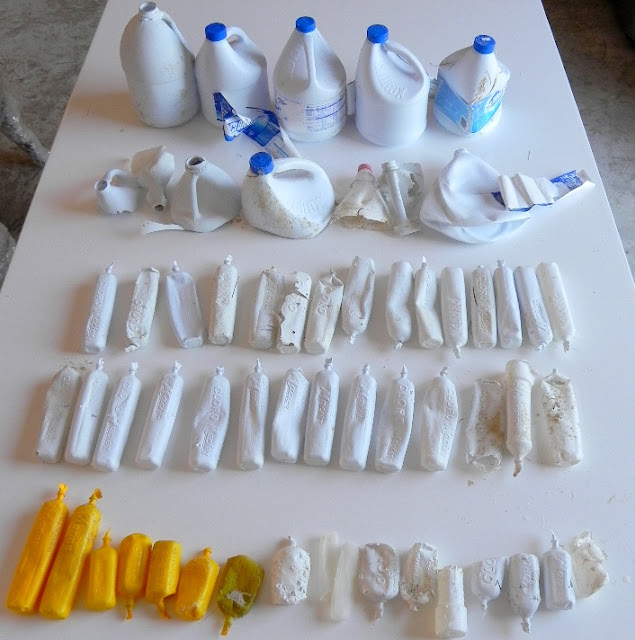 Approximately one dozen large bleach bottles, 31 large squeeze bottles, 8 smaller sized squeeze bottles, 7 vinegar squeeze bottles, and 2 mystery squeeze bottles.  Grand total of over 50 bottles of bleach.  Frightening considering these were all removed from a small stretch, roughly 3 miles, of shoreline in Longbay.  Imagine how many must be washing up all over Providenciales?  Over Middle, North, South and the entire Turks and Caicos.  Imagine the huge quantities that must be floating up on shores all over the Caribbean.  Although the vast majority of these bottles are labeled in Spanish, there is no telling where they came from and what they were used for.  One can only hope that they were not used illegally for catching lobsters, or otherwise leached into our oceans.  Nearly ten years ago the DECR began to combat this practice locally with a 2002 Memorandum of Understanding with the SFS-CRMS.  The School of Field Studies developed a portable test kit in 2005 to be able to detect the use of bleach using a swab test (please read the entire article here).  This year the DECR implemented a delay of lobster season to September, hoping to allow stocks more time to recover from shrinking numbers over the last few years.  If these found bleach bottles are indeed being used illegally, that amendment will be virtually powerless against this awful practice.  If you find bleach bottles here in the Turks and Caicos, please contact the DECR to report your findings.